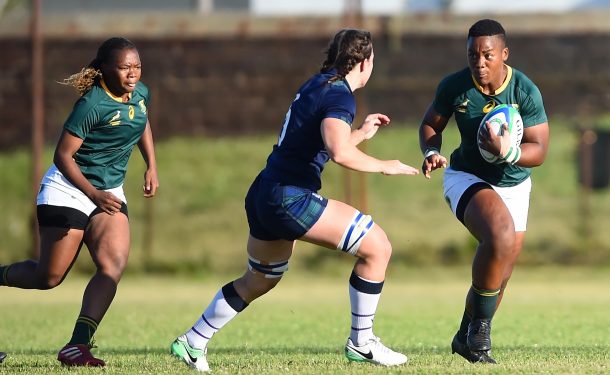 Springbok women’s captain Babalwa Latsha announced on social media platforms that she’ll be returning to South Africa from Spain because of the rampant novel coronavirus (Covid-19).

Latsha had joined Eibar Rugby Club in January‚ but the rapid spread of the coronavirus in Europe has led to various lockdowns in Europe. The same is applicable in Spain where a national lockdown and state of emergency has been declared.

According to the worldometer app‚ Spain has 11‚178 case and a reported 491 deaths. Latsha said the Spanish Rugby Federation extended its suspension of rugby in the country.

“The Spanish Rugby Federation has added another week to its two-week suspension of all rugby leagues. My stay has therefore been cut short. I will be heading home tomorrow morning [and] taking all necessary precautions. Stay safe bantase‚” Latsha said on Facebook.

Latsha later posted that her flight had been cancelled and she’s stuck in Paris for 11 hours.

With Latsha returning‚ the Varsity Cup board has also decided to suspend Varsity Cup‚ Shield and Young Guns matches with immediate effect.

Varsity Cup matches on Monday didn’t take place and with a number of member tertiary institutions having gone on forced vacations‚ a decision will be taken next month.

“Member universities are currently restructuring their academic calendars and programmes‚ which will have an effect on lecture dates and times‚ university recess breaks and examination periods‚” a statement read.

“SA Rugby is in ongoing deliberations on the reworked domestic rugby calendar and as a result‚ the Varsity Cup Board will reconvene towards the end April 2020 to reassess the situation and take a final decision on the 2020 competition.”