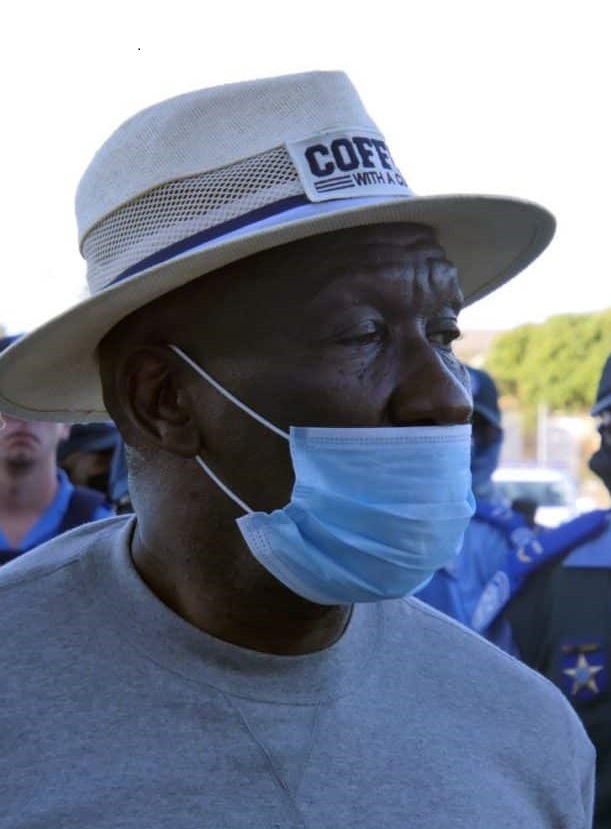 The Spar in Emalahleni and the Shoprite in the KG Mall both had chips and chicken for sale in their hot-meal sections.

Similar defiance of lockdown regulations was seen at the local taxi rank. An inspection of the rank‚ which was meant to be non-operational‚ revealed how local taxis continued to operate outside the stipulated hours. Addressing community members outside the KG Mall‚ Cele promised tough action against lawbreakers.

“At the rank‚ no one is meant to operate between 10am and 4pm. Those we found operating‚ we impounded the vehicles along with their drivers. We went to Spar and found cooked food. We took their manager‚ and the food‚” Cele said.

At the Shoprite store‚ law enforcers were more lenient and the manager of the hot-food department was issued with a fine.

“I was not aware it was wrong. I thought the provincial manager had an agreement with the law‚” said the retail worker found at the stand.

“You haven’t seen the law?” Cele asked the woman.

He warned the community against following in the footsteps of Embalenhle township‚ where more than 1‚000 people were arrested‚ some for having attended “after tears” gatherings held after funeral services.

He emphasised that it was disturbing to see that many citizens only followed the rules when law enforcers were visible.

“It shows that you know what you are meant to do but you choose not to. We implore you to do the right thing. Something as simple as washing your hands‚” he urged the community

The city has‚ for years‚ experienced problems with its water supply. For many‚ it was not an option to drink tap water because of its poor quality. In previous years‚ the municipality has blamed its old infrastructure for the troubles.

“You don’t have water? Okay. For those who do have water‚ wash your hands‚” Cele said‚ not offering a solution to those who claimed to not have water.

“This disease [coronavirus] has forced us to think of doing things differently. We don’t do handshakes‚ we don’t hug or kiss each other‚” he said to the amusement of the crowd.

Around the town‚ many of the furniture shops‚ cellphone repair shops and clothing shops were shut and locked.

“No cigarettes‚” was written on a paper placed at the door of one of the few open outlets.

Vegetable shops and butchers continued to operate‚ but the town was mostly quiet and clean. People seemed to be staying home.

Meanwhile‚ traffic police continued to monitor movement on the N12 between Johannesburg and Witbank.

Upon reaching the Belfast area‚ which borders Gauteng and Mpumalanga‚ traffic officers had mounted a roadblock where vehicle discs‚ licences and travel permits were checked.

Those without the required items were ordered to turn back.

Along the route‚ hitchhikers continued to try their luck. Trucks and motorists‚ however‚ drove past the hopefuls.