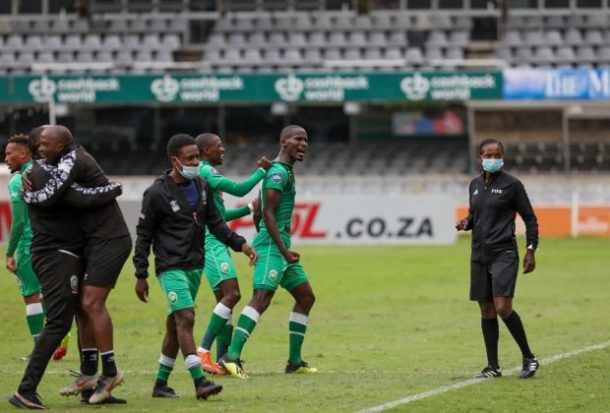 AmaZulu defender Tapelo Xoki scored a wonderful last-gasp free-kick in referee’s optional time to give the home side a 4-3 win over Bloemfontein Celtic in a breathtaking seven-goal thriller at the Kings Park Stadium in Durban on Tuesday afternoon.

The victory was a third in a row for Usuthu who have now cemented their place in the top half of the Premiership ahead of starting their second round of league fixtures.

AmaZulu allowed Celtic to come back from two goal down to force the game to a 3-3 stalemate before Xoki completed his brace in the fourth minute of added time with a wonder set-piece that gave Sipho Chaine no chance in Phunya Sele Sele’s goals.

Augustine Mulenga‚ Siyethemba Sithebe and Xoki goals had given AmaZulu a 3-1 lead‚ but two late goals by Tchilimbou in the and 89th minute and Victor Letsoalo’s 77th minute looked to have earned Celtic a second successive stalemate against Usuthu. Tchilimbou had initially cancelled Mulenga’s 12th minute opener in the 30th minute before Usuthu extended their lead early in the second half.

The win is a welcome change of fortune for Usuthu who always struggle to notch up such a run of wins‚ usually confirming their survival on the last day of the campaign as they did last season. This was the case before the 89-year-old Durban club was sold to one of SA’s top businessman Sandile Zungu‚ who has transform it with some decent playing and coaching signings.

Certainly‚ the new owner’s wish that Usuthu finish in the top four in the Premiership this season look on course if coach Benni McCarthy’s team can keep their wonderful form going in the second half of the 2020-21 campaign.

AmaZulu will shift their focus at the weekend as they play their Durban neighbours Lamontville Golden Arrows in the last 16 of the Nedbank Cup on Saturday.