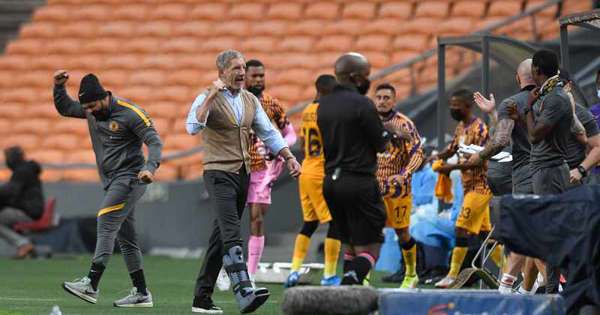 Baxter after Chiefs beat rivals Pirates: ‘I have to say that it was deserved’

Perhaps it was not surprising that both sets of coaches claimed their teams had outperformed the other in Saturday’s DStv Premiership Soweto derby‚ where Kaizer Chiefs ran out 2-1 winners over Orlando Pirates at FNB Stadium.

Depending on which set of statistics you chose to focus on in a game of defensive mistakes and unexceptional standards‚ either team could have conceivably claimed dominance.

Pirates had the better of possession and territory for most of the game‚ but were unable to utilise those to create anywhere near a high enough frequency of chances.

Chiefs played effective football on transitions with less of the ball‚ capitalised better on defensive errors‚ and in defence pressurised Pirates’ possession play efficiently enough to limit the Buccaneers to a low number of scoring opportunities.

Amakhosi coach Stuart Baxter felt this was enough to claim a deserved victory‚ and ultimately he had the scoreboard to back up his assertion.

“I thought we opened the game very well in the first 15 minutes — our passing was good‚ our possession and our counter-pressing‚ finding the right spaces that we had spoken about prematch‚” Baxter said afterwards.

“But then we were very passive in our pressing and counter-pressing‚ which allowed Pirates to play forward with virtually no pressure.

“It didn’t hurt us badly but it was threatening to hurt us‚ and we said at halftime that if they were going to hurt us that was how it was going to be.

“For example [Chiefs right-back] Njabulo Blom I thought had a bit of a dodgy first half but a good second half because he just adjusted his distances‚ and he got it more spot on in the second half.

“I thought we had more chances. And with the result I was wondering if this was going to be one of those games where I had to come to the media afterwards and say‚ ‘I thought we did well‚ but … but we missed chances‚ but we gave away for what I thought was a poor goal‚ Bernard losing the ball in the last five minutes on transition and then screwing up in a couple of areas.’

“But the lads came back‚ they pushed on hard‚ and in the critical phase‚ and in bad weather‚ you do get that sort of thing — defenders can panic. We got ourselves a penalty and won the game‚ and I have to say that it was deserved.”

In a game where both sides’ goals stemmed from defensive errors‚ Chiefs took the lead when Bucs captain Thulani Hlatshwayo’s sloppy back-pass was intercepted by Khama Billiat to set up Keagan Dolly’s 49th-minute opener.

Bernard Parker gave the ball away and Bucs substitute Terrence Dzvukamanja had acres of space to head at Daniel Akpeyi to allow Linda Mntambo’s 87th-minute equaliser for Pirates.

In added time Bucs centre-back Olisa Ndah slung an arm unnecessarily at Billiat‚ having won the challenge to a bouncing ball‚ to concede the 92nd-minute penalty Dolly scored the winner from.