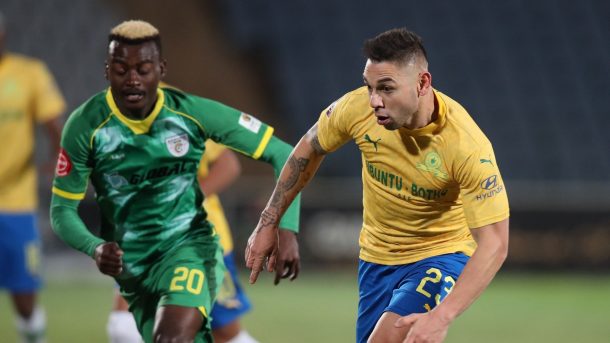 Relegation-haunted Baroka FC gave themselves a fighting chance while doing a big favour to long-time leaders Kaizer Chiefs by beating second-placed Mamelodi Sundowns 1-0 at Dobsonville Stadium to stop the defending champions from going top of the table.

Sundowns missed a glorious opportunity to open a three-point gap at the top of the Absa Premiership with two matches remaining after leaders Chiefs were shot down by the same score-line by Bidvest Wits for a killer blow to their league title aspirations in the earlier match at FNB Stadium on a dramatic Sunday.

But Amakhosi would have received a shot in the arm after Namibian international Ananias Gebhardt headed Baroka in front from a corner kick after 20 minutes and Dylan Kerr’s relegation-threatened charges fought tooth and nail to hold on for the crucial three points.

Sundowns remain level on 53 points with Chiefs but stay in second place due to their inferior goal difference.

The Brazilians will need to outscore Chiefs by four clear goals but have their work cut out against wounded tigers in Polokwane City and Black Leopards‚ two clubs facing the relegation axe and whose fans will hope their coaches would have learnt a thing or two from their provincial rivals Baroka on how to stop the ball-playing Sundowns in their tracks.

Baroka moved three points clear of automatic relegation ahead of their showdown against fourth-placed SuperSport United on Wednesday and will have a lot to say in the destination of the league title when they face off against Chiefs on the final day on Saturday.

Polokwane City remain rooted at the bottom after they were held to a goalless draw against Bloemfontein Celtic and the Clinton Larsen-coached side will have a mountain to climb in their remaining two matches against Sundowns and Wits.

The three Limpopo sides (Baroka‚ Leopards and Polokwane) are propping up the table and one of them is the bookies’ favourite to drop down to the GladAfrica Championship next season.

But the province will still have three representatives in the Premiership if two of them manage to beat the relegation axe after Bidvest Wits were sold to a Limpopo businessman who is renaming the 99-year-old club to Tshakhuma Tsha Madzivhandila FC (TTM) and relocating it north of its historical Johannesburg base to Thohoyandou.

Earlier in the day Swallows FC soared back to the Premiership with a 3-0 victory over TTM to book their place in the top-flight ahead of the start of the new season next month.