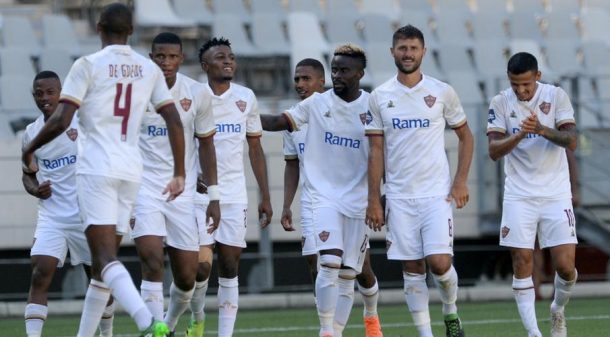 Stellenbosch coach Steve Barker has showered praise on his players after they produced a strong display as they comfortably overwhelmed rivals Cape Town City at the Athlone Stadium on Saturday.

The 3-0 win‚ courtesy of goals from Alan Robertson and Judas Moseamedi‚ was Stellies’ second of the season as they moved to the top of the DStv Premiership log standings for a few hours‚ before champions Mamelodi Sundowns overtook them on Sunday evening after powering past TS Galaxy.

Barker was pleased with his side’s display as they continue to show improvement from some of the matches they have played since the beginning of the new 2021/22 season.

“I am delighted for the club and the players [and this is] a massive win against our derby rivals‚” he said.

“I just thought that again each player stood up and stuck to the game plan.

“We were ruthless and we took our chances‚ which then obviously at the end killed the game off. Jah‚ we had to work hard for this victory.”

Barker applauded his defenders for keeping a clean sheet and said they executed the plan very well on match day.

“Our defensive structure was really solid and we looked dangerous every time on transition‚” he said.

“We knew that they would be out of shape and position. All in all‚ I am pleased with the results.”

Barker also heaped praise on the Maroons’ new kid‚ Devin Titus‚ for his gutsy performance against the tough Mother City side.

“I am very happy for Devin on his debut [while] playing a little bit out of position against Cape Town City‚” he said.

“It is his first DStv Premiership match and to come up with a performance like that‚ give credit to him.

“He is a hard-working kid and he has got a great work ethic. I am proud of him.”

As for City‚ they will be disappointed with the result as they looked very promising in the early minutes of the game.

Both teams will be back in DStv Premiership action at the weekend‚ with City away to Swallows FC on Friday‚ September 24 and Stellenbosch hosting Chippa United the next day.