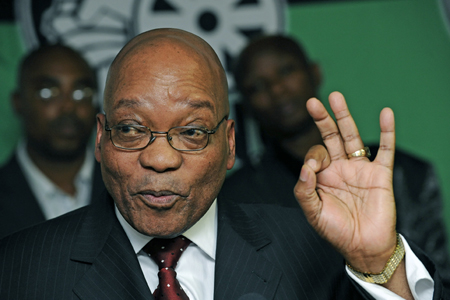 Arms deal whistle-blower Richard Young has questioned the credibility of the Seriti Commission of Inquiry‚ which found there was no evidence of arms deal corruption or bribery when navy frigates‚ fighter jets‚ submarines and helicopters worth billions of rand were purchased by South Africa more than 16 years ago.

President Jacob Zuma — who faced 780 charges of corruption related to the arms deal in 2007 — announced the findings on today.

Young‚ whose Cape Town company lost a bid to supply a critical component of the combat suites aboard new navy frigates purchased in the deal‚ disagreed.

He said on Thursday he had submitted documentary evidence implicating some of the companies involved in the arms deal of paying politicians.

“The process was so flawed that no (allegedly corrupt) witness could be properly discredited through cross-examination‚” he said.

Zuma said that the commission found no support for the widespread allegations of bribery‚ corruption and fraud especially in relation to the selection of the preferred bidders and cost.

He established the commission in September 2011 to probe allegations of fraud‚ corruption and irregularities.

But the credibility of the commission came under intense scrutiny after a series of controversies‚ including the resignation of evidence leaders who alleged that a secret agenda was at play.

Attorney Norman Moabi‚ one of the evidence leaders‚ said in his letter of resignation in January 2013: “I cannot with a clear conscience pretend to be blind to what is going on at the Commission.”

He alleged that commission chairman Judge Willie Seriti had a “total obsession with the control of the flow of information” and the “unknown persons” were dictating which evidence leaders could deal with witnesses and why.

Judge Seriti denied the claims saying: “I am a senior judge and am fully conscious of the oath of office that I took. I am assisted by two other senior judges whose integrity is beyond reproach. All of us know that the success of this commission depends on our credibility and it is inconceivable that we would depart from the clear mandate given us by the president and instead pursue an unknown agenda.”

Four navy frigates‚ three submarines‚ 26 advanced Gripen fighter jets‚ Hawk training aircraft and helicopters purchased in the arms deal are estimated to have cost in the region of R70 million.

But Defence Minister Nosiviwe Mapisa-Nqakula conceded in 2013 that almost half of the Gripens had been placed in long term storage. Budgetary constraints severely curtailed the number of operational hours flown by the state-of-the-art aircraft.

The navy has also experienced mishaps with its fleet‚ including having to replace frigates’ engines and damaging a submarine‚ the SAS Queen Modjadji‚ when it struck the ocean floor on a training exercise between Port Elizabeth and Durban in 2012.

Speaking on SABC television‚ Zuma said the commission found that the items purchased in the arms deal were being “well-utilised“.

Zuma said job opportunities anticipated in the deal had materialised and that the promised offsets offered by suppliers of the hardware “have substantially materialised“.