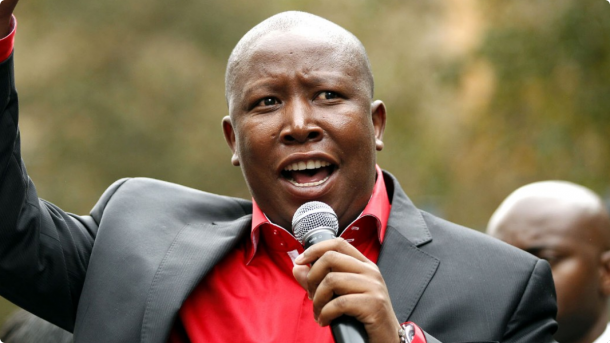 Economic Freedom Fighters leader Julius Malema is being charged under an old Apartheid-era law passed in 1956 to prohibit gatherings in open-air public places if the Minister of Justice considered they could endanger the public peace.

The Riotous Assemblies Act came into being after delegates had gathered the previous year at a Congress of the People to discuss the Freedom charter‚ at Kliptown‚ Soweto.

The notorious law was also used as the title of a satirical book in 1971 – ‘Riotous Assembly’‚ by Tom Sharpe‚ which mocked apartheid and the police who enforced it.

The first case is related to statements made by Malema at the EFF’s elective conference in Bloemfontein in December 2014 where Malema called for his supporters to invade unoccupied land.

He told the EFF’s elective conference in Bloemfontein in 2014 that: “We are going to occupy the unoccupied land because we need the land. For us to eat‚ we must have the land. For us to work‚ we must have the land… I come from Seshego. If there is unoccupied land‚ we will go and occupy the land with my branch. You must go and do the same in the branch where you come from.”.

At the time‚ AfriForum laid criminal charges against Malema.

The second case is from June 2016‚ when Malema told supporters in Newcastle that white people can’t claim ownership of land because it belongs to the country’s black African majority.

In May the Sunday Times reported that the Minister of State Security David Mahlobo had now taken charge of government efforts to have Malema arrested for making “violent threats” against the state.

Deputy president Floyd Shivhambu told a news conference after the summons for two cases were served on Malema that the charges were a “reflection of a desperate state and a manipulated captured state that is utilising its state institutions to persecute the leader of the Freedom Fighters for something that happened a long time ago.”

Malema is due to appear in Bloemfontein and Newcastle courts on November 14 and 7 respectively.