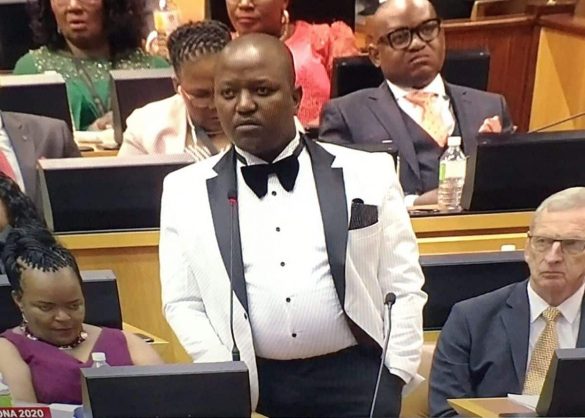 ANC MP Boy Mamabolo on Friday apologised to EFF leader Julius Malema and his wife over his “insensitive” abuse claims made in parliament.

Malema was responding to President Cyril Ramaphosa’s state of the nation (Sona) address during Tuesday’s debate when Mamabolo stood on a point of order and then directly asked the EFF leader to confirm or deny allegations that he physically abused his wife.

The lawyers said Mamabolo needed to apologise – and that failure to do so would lead to him being sued for R1m.

The letter from Ian Levitt Attorneys read: “As you are well aware‚ these defamatory statements were made by you during the state of the nation address in parliament and furthermore repeated to the Sowetan newspaper to be published on February 17.

“Should you fail to [apologise]‚ we hold instructions to institute further legal action against you‚ which action will institute damages against our client in the amount of R1m and seek punitive costs against you.”

In his apology‚ issued on Facebook in the early hours of Friday‚ Mamabolo said he questioned Malema about the abuse allegations after he received messages from “some jealous friends” called “friends of Mantoa”.

He said he had been receiving messages from the “so-called friends” since November 2019.

“I was therefore actually wrong to raise the matter in public without consulting with you as my former family friends to verify these false allegations from jealous friends of Mantoa.

“Gender-based violence in South Africa has reached an alarming rate and is not a matter to be used to settle political scores.

“The fight against femicide and GBV is a fight I recommit myself to and even after these unfortunate events I will continue to contribute in challenging it and fighting it. My actions impugned your reputation‚” he said in his statement.

Mamabolo said he sent a copy of his statement to the Speaker of the National Assembly Thandi Modise‚ chairperson of the National Council of Provinces (NCOP)‚ Amos Masondo‚ ANC chief whip Pemmy Majodina and Ramaphosa.

He had also apologised to MPs.

“I humbly request you to accept my sincere apology‚ I wish you a happy Malema family (as I’ve always did) jealousy must never break you‚ stay strong my comrades‚” he said.