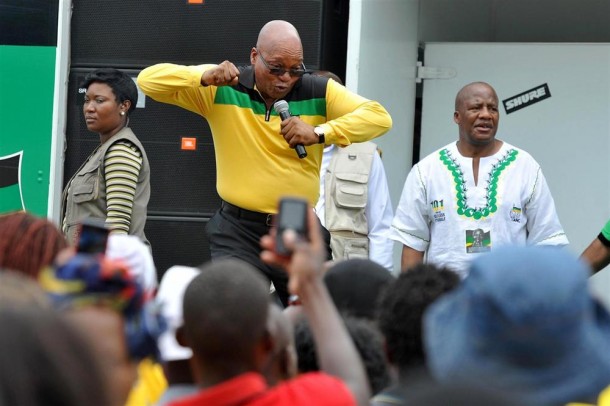 Zuma said the ANC Mpumalanga leader David Mabuza has promised that the province would win the upcoming local government elections by 90%.

“The province promised me 90% in the previous elections. I promised to come back for celebrations but you did not get 90%.

“So now you get 90% results and brew alcohol, I’m coming for celebrations,” Zuma said.

He repeated that ANC supporters should not vote for parties that have no track record in leading a country.

“There’s no well-thinking person who will vote for these smaller parties that do not have a track record of leading a country.

“Some of them – I forget their names – are even making a mockery of our respected parliament. They resort to fighting, they cannot debate issues.

“While we are busy in parliament trying to implement laws to change the country, they make a mockery of our respected parliament,” he said.

Zuma further said the outcry by ANC members that were unhappy with the final list of councillors was a sign of a working democracy within the governing party.

He said the ANC this time was going to monitor councillors and they would have to report to the party now and again about their work.

“We want councillors to hold meetings with the community they serve, tell them about their work. As the party leaders, we will monitor councillors’ work, they will have to report back.”

Meanwhile, ANC treasurer general Zweli Mkhize said the party was prepared to learn from its mistakes after 22 years of governance.

Mkhize was addressing thousands of party supporters at the Monsterlus Stadium in Sekhukhune, Limpopo, yesterday.

He said the party had noted the concerns of communities across the country regarding the way in which councillors were elected .

But now, he said, councillors would have to sign performance and accountability agreements with the ANC as a way of ensuring that they do not neglect their duties.

“We urge our people to exercise their power and speak out,” he said.

Mkhize also condemned the burning of state property, especially schools. He said people should not destroy property if they disagreed with the government.