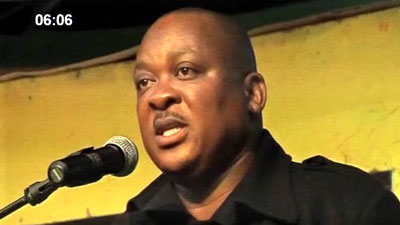 ANC heavyweight John Block has to pay the state R2 million while he will also serve 15 years in jail for fraud and money laundering.

The verdict sends a strong signal at a time when there are perceptions that the state is soft on corruption.

Block and his co-accused Teifecta director Christo Scholtz were sentenced to 15 years in prison each on Tuesday in the Northern Cape High Court in Kimberley.

National Prosecuting Authority Northern Cape spokesman Phaladi Shuping said the two were appealing the sentencing and the appeal would be heard on Wednesday.

Their bail application was extended‚ he said.

In October last year‚ Block was convicted of fraud and money laundering relating to the leasing of buildings to the Northern Cape social development department‚ which rented buildings owned by the Trifecta Group.

Shortly after his guilty verdict‚ Block‚ who was the ANC Northern Cape chairman and finance MEC resigned.

Scholtz was also found guilty of two counts of corruption.

The ANC in the Northern Cape is expected to hold a provincial elective conference next year where it will elect Block’s successor.

Shuping on Tuesday said Block was sentenced to 15 years for corruption and 12 years for money laundering‚ which would run concurrently.

An application for a confiscation order of assets of Trifecta‚ Block and Scholtz was granted on Wednesday.

An amount of R60m was agreed upon.

Block would pay back R2m to the state.