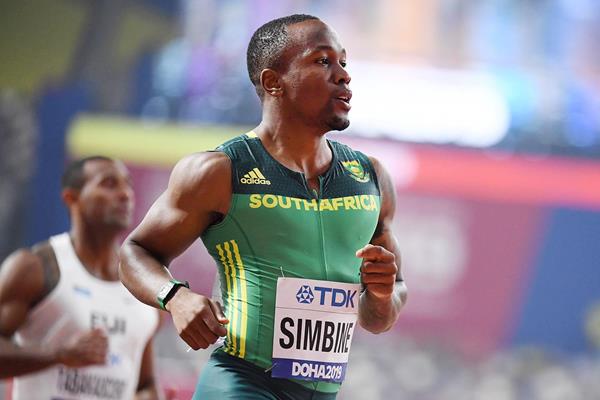 African record-holder Akani Simbine steps into the OK Corral of world sprinting in Monaco on Friday night where four of the five fastest men in the world will slug it out in what is likely to be an Olympic dress rehearsal.

Simbine‚ who claimed the world No2 spot on Tuesday when he clocked his 9.84sec continental mark in Budapest‚ will face the American Games trio of Trayvon Bromell‚ Ronnie Baker and Fred Kerley.

The only man missing from the top five is Marvin Bracy‚ also with a 9.85 season’s best‚ but Simbine smoked him in Hungary.

Then add Italy’s Lamont Marcell Jacobs‚ who went 9.95 in May and Canadian star Andre De Grasse‚ the 2016 Olympic bronze medallist who is infinitely more dangerous than his 9.99 season’s best.

Whoever wins this contest will enjoy a massive confidence boost going into the Games.

While SA fans hold their breath over Wayde van Niekerk‚ who withdrew from the 400m in Budapest after feeling a lower back discomfort‚ they can relax a little knowing that Simbine has stepped into the breach as the country’s strongest medal contender ahead of the Tokyo Games.

SA athletics has four hopefuls. Apart from Simbine and Van Niekerk‚ the reigning 400m champion‚ there are Ruswahl Samaai and the men’s 4x100m relay team.

Long-jumper Samaai is also in action in Monaco‚ also against a classy field topped by world No.1 Miltiadis Tentoglou of Greece. Five of Samaai’s rivals have jumped further than he has this season‚ and this will be the perfect opportunity to jump himself into Tokyo contention.

The relay team has lost its gloss since winning World Relays in Poland earlier this year. Simbine‚ Gift Leotlela and Shaun Maswanganyi have shown good form‚ but they need a fourth to hit their straps.

Thando Dlodlo‚ who ran the opening leg of the relay in Poland‚ didn’t win selection for the Olympic squad‚ but he has found good form recently and his season’s best is quicker than the two relay reserves who were included in the squad.​