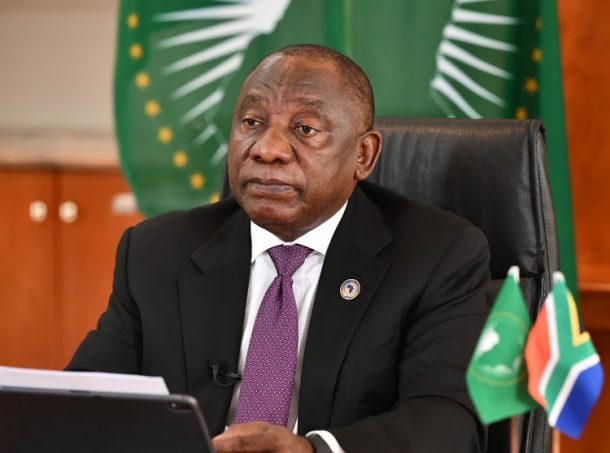 African Union wants to meet in person‚ despite Covid-19 pandemic

Despite continuing alarm across the world‚ and in many African states‚ the African Union (AU) has suggested its 34th Ordinary Session of the Assembly be convened physically in Addis Ababa‚ Ethiopia.

However‚ the body said it will consider other options – including a digital session – should this not be possible.

On Tuesday‚ President Cyril Ramaphosa‚ the current AU chair‚ said: “The meeting of the Bureau of the Assembly and the Chairs of Regional Economic Communities (RECs) agreed to hold the 34th Ordinary Session of the Assembly physically‚ with a streamlined agenda and limited participation‚ at the AU Commission headquarters in Addis Ababa in accordance with protocols to be developed and circulated by the Africa CDC [Centres for Disease Control and Prevention].

“The CDC‚ working together with the AU Commission‚ will advise accordingly‚ taking into account the need to observe the development of the pandemic‚ especially the second wave that has been officially declared in some countries within the African continent.

“In the event of the situation worsening and based on the expert advice of the CDC‚ the 34th Ordinary Session of the Assembly shall be held virtually to‚ among others‚ conduct online/electronic elections of the senior leadership of the commission.”

If it goes ahead in person‚ the meeting will be held at the AU headquarters in Ethiopia on February 6 “with a highly streamlined agenda and limited participation per delegation”.

This decision was taken by Ramaphosa and other African leaders during a December 24 teleconference meeting of the Bureau of the Assembly of the AU and the chairpersons of the AU RECs.

Ramaphosa commended the heads of state and government for their extraordinary leadership in the fight against Covid-19.

“The chair of the Union reiterated the meeting was convened to explore the best way to convene these ordinary sessions in the light of the unfolding second wave of the Covid-19 pandemic which appeared to be more intense than the first wave.

“Should it not be possible to hold a physical 34th Ordinary Session due to Covid-19 pandemic‚ the chairperson of the commission recommended a virtual session that would‚ among other agenda items‚ conduct electronic/online elections for the senior leadership of the commission.

The director of the Africa CDC‚ Dr John Nkengasong‚ provided an update on the status of the Covid-19 pandemic on the continent.

“It was noted the second phase of the Covid-19 pandemic has been declared in some African countries‚ and SA in particular.”

The presentation highlighted an upsurge in the continent‚ with varying degrees of increasing infections and fatalities which at this stage were notable on the upward trend. It was mentioned that although the infections were showing an upward trend‚ in Addis Ababa there was a noticeable downward trend.

Nkengasong confirmed the pandemic was accelerating and had picked up since July 2020‚ and said the impact of the holiday festivities would not be known until the middle of January 2021.

Assessment of the situation during mid-January will indicate trends and patterns and this will inform recommendations.