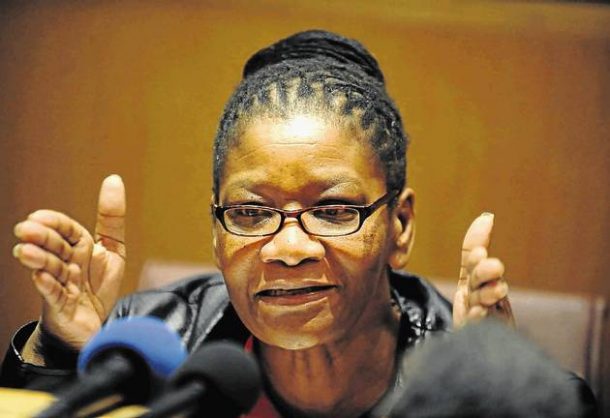 National Assembly speaker Thandi Modise has approved the DA’s request for parliament to initiate proceedings for the removal from office of public protector Busisiwe Mkhwebane.

It will be the first time that parliament looks into the fitness of a head of a Chapter 9 institution.

This follows last month’s adoption by the National Assembly of new rules concerning the removal of office-bearers in the institutions supporting constitutional democracy. They include the office of the public protector.

The rules state that if the speaker is satisfied that the motion meets all requirements‚ he or she must refer the motion and any supporting documents for preliminary assessment to an independent panel. The speaker must also‚ without delay‚ inform the assembly and the president of this referral.

“Having approved the motion‚ the speaker has thus written to political parties to put forward proposed nominees to serve on the panel made up of fit and proper SA citizens‚” parliament said in a statement.

The rules stipulate that the panel must collectively have the necessary legal and other competencies and experience to conduct the assessment. A judge may be appointed to the panel but the speaker must make such an appointment in consultation with the chief justice.

Parliament said political parties have until February 7 to submit their recommended nominees‚ after which a panel will be appointed. Within 30 days of its appointment‚ the panel must conduct and finalise a preliminary assessment on the motion proposing a section 194 inquiry and make a recommendation to the speaker.

The party never supported Mkhwebane’s appointment and accused her of being a spy.

“She has time and again proven that she is unfit to hold office‚ has consistently demonstrated an inability to conduct her work independently and has illustrated a poor understanding both of the law as well as of her mandate as public protector.

“Worse‚ Mkhwebane’s actions have caused immeasurable damage to the once respected reputation of the office of the public protector‚” said Mazzone in her request last month.

Mkhwebane has previously said she was not deterred by the calls for her removal and that she believed she would complete her seven-year term of office.