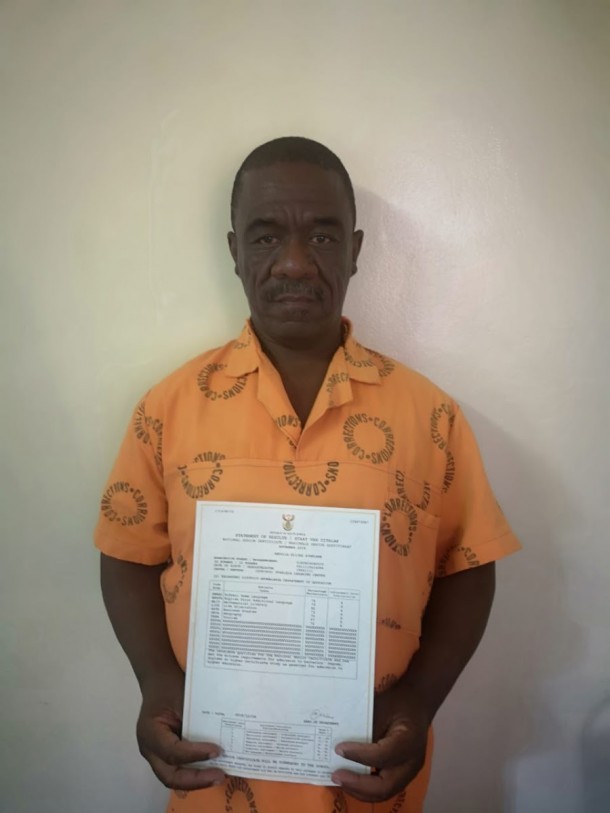 Abdullah Simelane was the oldest of the 235 inmates who wrote their matric last year and the 52-year-old passed with flying colours.

Simelane who is serving a 23-year jail term for rape at the Barberton prison in Mpumalanga said he hopes achieving his matric will open doors for him.

The father of two said he was sentenced in 2015 and being incarcerated has given him time to see things differently and realise the value of education.

“If I had an opportunity to study back then‚ I don’t think I would have committed this crime‚”  he told TimesLIVE.

He dropped out of school as a teenager‚ a choice he said was out of his hands.

“Things were really tough for me. My family could not afford to pay for my school fees and other things I needed and I saw dropping out as the only thing‚” he said.

Simelane said he hopes to get funding so that he can continue furthering his education. His dream is to enrol for a degree in political science.

Inmates serving in South African correctional facilities scored a 77.3% matric pass rate for the 2018 academic year‚ which is two percentage points lower than the 79.42% national average. The result however is an increase on last year’s 76.7% pass rate.

In a statement‚ the department of correctional services said Simelane was one of the most notable matriculants from their centres as he received a bachelor pass and was the oldest candidate.

“My results are good‚ but I expected to do way much better than this‚” Simelane told TimesLIVE.

“This is a third uninterrupted 100 percent pass for Usethubeni School in Durban Westville. A total of 28 distinctions were recorded at the school‚”  the department said in a statement.

The top achievers from DCS schools are:-

DCS said it works with the department of basic education to offer extra support classes and strives to create the best suitable environment for learning and teaching for inmates‚ a statement that Simelane agreed with.

“I wouldn’t have done it without the support of the department. The officials encourage us to study so that we can come out of prison as better people‚” Simelane said.

Minister of justice and correctional services Michael Masutha said education is a critical component of the rehabilitation measures of any correctional system.

“It has also been proven that inmates who participate in educational programmes see the future differently as they develop a more positive outlook. The DCS will continue to do the best it can to ensure that as many inmates as possible are able to access education to enable them to lead lives and productive and socially responsible members of their communities upon their release.” Masutha said.