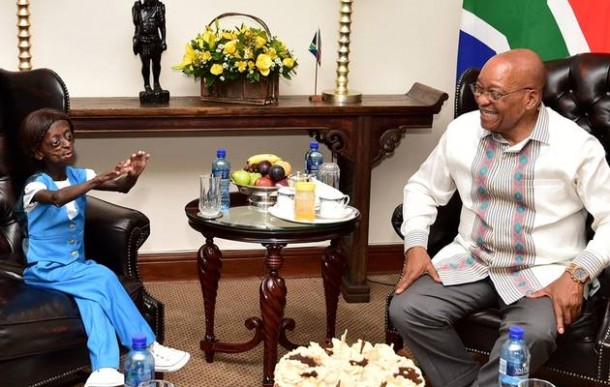 Zuma mixes politics with the personal at Ontlametse Phalatse’s funeral

President Jacob Zuma on Friday recalled his meeting with Ontlametse Phalatse as he paid tribute to the progeria sufferer as an “articulate and bright” lady.

Zuma was among several high-profile mourners who attended Ontlametse’s funeral in her hometown‚ Hebron‚ in North West province.

“I wanted to make her happy and ease her life‚” said Zuma‚ who met Ontlametse shortly before her death last week.

“She told me she wished for two things: to have a car‚ and I said‚ consider it done. Then a house. That too [I said] she should consider done‚ because I had planned to build her house in which she could move in around June this year‚” Zuma said.

Zuma thanked Tebogo Mothoa‚ the family friend who realised that Ontlametse might have progeria‚ a rare condition that causes accelerated ageing.

“This is what a neighbour should be like‚ to love your neighbour as you love yourself‚” he added.

Ontlametse‚ who was 18 when she died last week‚ was the first black child in the world to be diagnosed with progeria and cheekily called herself “the first lady”.

Doctors had initially predicted that she would die around 14. But the petite youngster survived and became an inspiration to thousands of South Africans‚ especially after her story was broadcast on a television programme.

The president was reminded of their first encounter‚ where he was amazed by Phalatse’s confidence and eloquence.

“This young lady was talking throughout‚ very articulate and bright. As she took me through what the disease does to the body.

“I was touched‚ because I had seen her on television and here I am seeing her in person.

“Why couldn’t she live‚ a double life?” Zuma asked as he spoke about how he had planned to surprise her with a car at his recent birthday party.

The president encouraged the medical community to invest in research.

“Medical people should realise that we need to do more research on ailments‚ particularly those that are rare. Research should be done so that a diagnosis is done from birth so that we deal with it immediately.”

Zuma used the occasion to take a swipe at the media‚ saying that Mothoa deserved to make headlines as often he did.

His last words of support went to the family and Ontlametse herself: “Go well‚ our hero‚ our first lady.”

As a tribute‚ pop star Lira sang the song Something inside so Strong‚ which she said was Ontlametse’s favourite.

Premier Mahumapelo told Zuma not to be distracted.

“Stay firm and focused on the strategic objectives. Don’t look around and listen to the noise‚ which is continuous‚” Mahumapelo said.