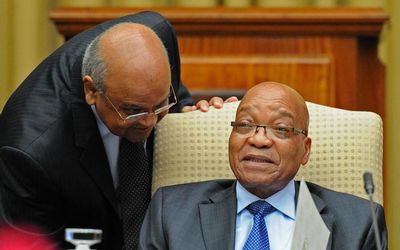 ‘Zuma has no mandate to directly oversee state entities’: DA

Putting President Jacob Zuma in charge of strategy of all state-owned enterprises (SOE) “defies all logic owing to the fact that he has been fingered in many dodgy deals”‚ the Democratic Alliance (DA) said on Tuesday.

The decision to place Zuma at the apex of decision-making is noteworthy‚ as there has been significant tension within the government over state-owned companies‚ particularly between South African Airways (SAA) and Denel‚ and the Treasury‚ it reported.

The DA’s Natasha Mazzone described it as “is manifestly irrational for the simple reason that Zuma has no mandate to directly oversee state entities given that he has Cabinet appointments in (Public Enterprises Minister) Lynne Brown and (Finance Minister) Pravin Gordhan who are paid in excess of R4-million per annum between them to carry out this very function”.

“This ill-conceived decision by Cabinet will effectively hamstring both Brown and Gordhan even further and block them from fixing our beleaguered state entities as they have to committed to doing‚” she added.

“This is obviously by design so that Zuma can further frustrate the process of rescuing the most mismanaged SOEs such as SAA and Denel and in so doing continue his reign of patronage in favour of (SAA board chairperson) Dudu Myeni and others.

“This will be the last nail in the coffin for entities such as Eskom‚ Denel and SAA that have seen their balance sheets heavily impaired by ANC cadre related deals and gross mismanagement by Zuma appointed executives.”

Mazzone said the DA will write to the Presidency and Gordhan to ask:

– “Will the Presidency be forming a presidential coordinating committee or any committee that seeks to oversee state owned companies;

– Will the president be overseeing strategy in state-owned companies through the presidential coordinating committee;

– “What will be the powers of the presidential coordinating committee;

– “When will the presidential coordinating committee come into effect; and

– “Whether or not this is an effective duplication of the minister of public enterprises?”