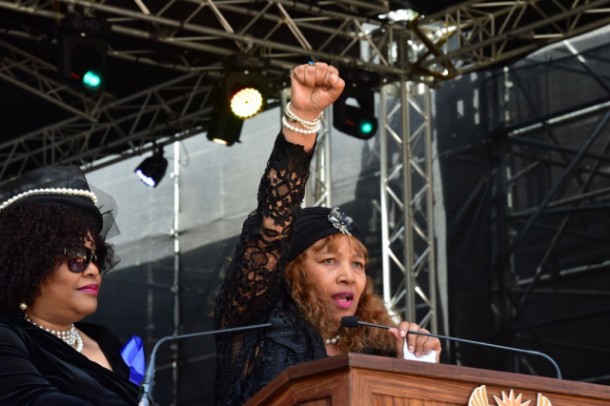 Zenani lashes out against lies told about her mother

Winnie Madikizela-Mandela’s daughter Zenani Mandela said those who came out with the truth about her mother after her death had robbed her of her rightful legacy during her lifetime.

Speaking at her mother’s funeral service at Orlando Stadium‚ Johannesburg‚ Zenani said they had sat on the truth about her mother’s past came out after her death.

She said these lies had become part of her mother’s life. “As each of them disavowed these lies‚ I had to ask myself why they had sat on the truth and waited till my mother’s death to tell it.

“It is so disappointing to see how they withheld their words during my mother’s lifetime knowing very well what they would have meant to them‚” Zenani said to cheers from the crowd.

Zenani said only they knew why they chose to share the truth with the world when she had died.

“I think their actions are actions of extreme cruelty because they robbed my mother of her rightful legacy during her lifetime. It is little comfort to us that they have come out now.”

Zenani also turned her anger on the media and others. “And to those of you who vilified my mother through books‚ on social media and speeches‚ don’t think for a minute that we have forgotten. The pain you inflicted on her lives on in us.

“Praising her now that she is gone shows what hypocrites you are. Why didn’t you do the same of her male counterparts and remind the world of the many crimes they committed before they were called saints?”

An emotional Zenani‚ who struggled to talk at times‚ said that during the period after her mother’s death‚ it had become clear that South Africa and the world held men and women to different standards of morality.

“Much of what my mother had been constantly asked to account for is simply ignored when it comes to her male counterparts and this kind of double standards acts also to obscure the immense contribution of women to the fight for the emancipation of our country from the evil of apartheid‚” she said.

She reminded the crowd that when her father‚ Nelson Mandela‚ was imprisoned‚ it was her mother who kept his name alive. “Even before it was fashionable to do so‚” she said.

She further implored Madikizela-Mandela’s supporters not to be tempted to discount her father‚ Nelson Mandela‚ and that people should accept that they complimented each other.

“The battle of our freedom was not some polite picnic‚” Zenani said.

Zenani said her mother’s life was one of the most unique stories in recent history. “She dared to take one of the most powerful and evil regimes of the past century and she triumphed.”

She said her mother’s life was a remarkable one.

“For those us who have been close to her‚ we have always appreciated just what she meant to the world. But even we were unprepared for the scale of the outpouring of love and personal testimonies from so many.” – TimesLIVE