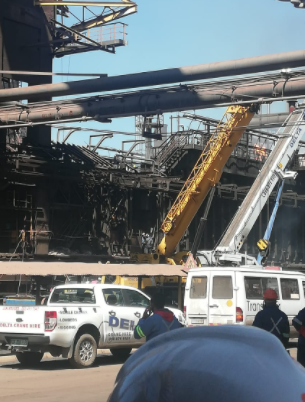 The three workers who were trapped after an explosion at ArcelorMittal’s premises in Vanderbijlpark‚ Gauteng‚ on Wednesday have been confirmed dead.

According to the National Union of Metalworkers of SA (Numsa)‚ the explosion happened at around 2am.

“The families have been waiting and anxiously hoping that their loved ones would be found alive‚ but unfortunately that was not to be‚” Numsa regional secretary in Sedibeng Kabelo Ramokhathali said.

The union has called on the department of employment & labour to conduct a “thorough and detailed” investigation into the cause of the accident.

“We also want to thank the men and women who worked tirelessly to ensure that these bodies were located.

“We are convinced that had it not been for the intense efforts of workers themselves‚ who risked their own lives and took the initiative searching through the massive pile of rubble to locate workers who were trapped under the building‚ would not have been able to recover these bodies.

“We send our deepest condolences to the family and friends of those who have passed away‚” Ramokhathali said.

ArcelorMittal SA said on Wednesday that a portion of a 90m stack at one of the operation’s coke batteries failed in the early hours of the morning‚ and fell onto the coke battery control room in which the three employees had been working.