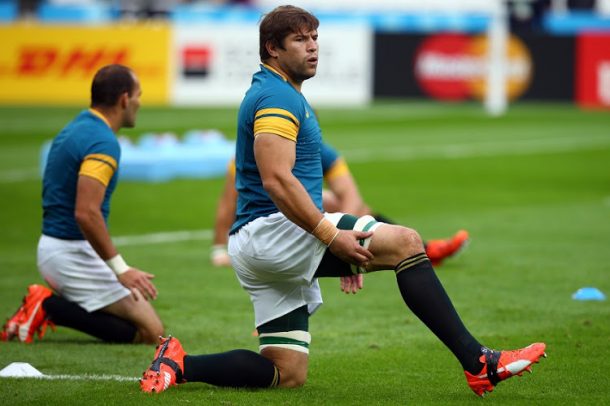 Willem Alberts’s bone-rattling physicality will after all be on display at Ellis Park on Saturday.

The Lions have named the hulking flank on the bench for their Super Rugby clash against the Stormers. Earlier this week‚ it was made clear that Alberts would miss this clash due to a bicep injury he sustained in his last match for Stade Francais before joining the Lions. His rapid recovery is a medical wonder.

“Willem had a bit of scar tissue that was hurting from last week. The medical team and Willem managed to get rid of that Monday‚ Tuesday‚ Wednesday. He came through the Tuesday session well. It is nice for us to select him‚” explained Lions coach Ivan van Rooyen.

Alberts being unleashed in the final quarter may be worth the admission fee as he is likely to run into Stormers starlet Pieter-Steph du Toit.

“His X-factor is his physicality‚” said Van Rooyen about his new recruit. “He has played lots of games like the one coming up. He will bring some energy for us as well.

“He has worked hard since his arrival. The injured arm has not prevented him from running. It has only been the contact part.”

Jannie du Plessis retains his place at tighthead despite copping a lot of heat in the scrums against the Reds last week.

“The guys needed to be on the same page pre-set piece‚ pre-scrum‚ pre-maul. We probably had 25‚ 30 minutes unit time together before this week. This week we probably had an hour‚ to an hour and a half‚” said the coach.

That explanation was used as defence for selecting the same pack of forwards against the juggernauts from the Cape.

In the backs‚ however‚ outside centre Duncan Matthews has dropped out of the match-day squad. Matthews started the first two games of the season but has made way for Manuel Rass‚ while Wandisile Simelane makes an overdue return to the squad‚ albeit on the bench.

Van Rooyen put the change down to rotation. “Manny has been training well. Defensively he has gone well. Wandi is coming back and he can make a big difference for us in the second half.”

Asked whether Simelane had lacked the required fitness levels to justify earlier selection‚ Van Rooyen shook his head. “No. Just working hard‚ understanding systems‚ getting fitter. All the centres trained well. Duncan had played well and now it is Wandi’s turn.”

Saturday’s challenge will be a stern one for the Lions. They have already dropped points to conference rivals the Jaguares and another slip-up will seriously dent their chances of being among the front runners this season.

“They are obviously playing well and have momentum on their side‚” said Van Rooyen of the high-flying Stormers. “They have a world class forward pack. They have a lot of Springboks in there. The battle will start upfront.”

The Stormers are yet to concede a point this season and the Lions are keen to break ground in that area.

“We are looking forward to playing against that defensive system. They get a lot of confidence from that. We have identified areas where we can attack and play.”