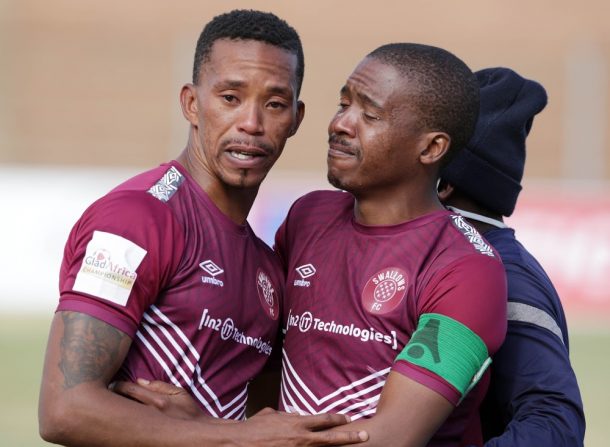 Why Vuyo Mere says he owes a debt of gratitude to Lebohang Mokoena: ‘I have to thank Cheeseboy’

It hasn’t sunk in yet for veteran defender Vuyo Mere and he is still trying to wrap his mind around the fact that he will be playing in the Premiership again next season after helping Swallows FC to win automatic promotion a few days ago.

The 36-year-old former Bafana Bafana‚ Mamelodi Sundowns and Platinum Stars player’s return to the top-flight will make him one the oldest players in the league along with the likes of Reneilwe Letshlolonyane and Jabu Maluleke.

He struggled to find the words to explain what he was feeling after Swallows soared to the premiership on Sunday.

“It’s going to take a bit of time before it sinks in‚” he said.

Mere said the past five years were challenging for him and he suffered a lot of setbacks in his career.

“The past four to five years have been frustrating with a lot of ups and downs but mostly downs. During this time‚ it has been nothing but a downward spiral for me as I was relegated with Platinum Stars.

“When I thought I had recovered with Wits‚ they released me without a valid reason and after that it was a struggle to find a team.

“Every door that I knocked on‚ people ignored my knocks and I felt like it was the end for me in football. I asked myself a lot of questions because I didn’t know what I was going to do‚ because football is the only thing that I know.

“Luckily‚ I got a job at Swallows and there are so many people that I must thank like Cheeseboy (Lebohang Mokoena). He is the one who made it possible for me to join Swallows because he convinced them.”

Mere is well aware that given his advanced age‚ some are not convinced he will be able to withstand the rigours of the Premiership.

“Nobody gave me a chance before I signed with Swallows because they said I was a reject and all that‚” he said.

“Look at Siyabonga Nomvete‚ he is still playing in the National First Division (NFD) and he is over 40 years old. If people think that I am old‚ there is a new season coming up but I have nothing to prove to anybody.

“I know my capabilities‚ I have been there and done it‚ so I am not going to put myself under any pressure by saying I am going to prove something to people who doubt me. There is also Jabu Maluleke and Thabiso Semenya at Polokwane City‚ and others who are older than me and are still playing.”

While he was struggling to find a job‚ Mere said he was invited to train with Tshakhuma Tsha Madzivhandila (TTM) in Venda only for the coach to send him away.

“At some point‚ TTM invited me to Venda. I packed my bags and drove to Louis Trichardt and I got there around 1am in the morning.

“They gave me a small room and said in the morning we will go to training and everything will be sorted out. In the morning when I got to training‚ the coach at that time‚ and I even forgot his name‚ asked who I was and said he doesn’t need my services.

“I was very heartbroken. I went back to the room to pack my bags and drove back to Johannesburg. I stayed two to three days at home and I called Cheeseboy and he invited me to their training.

“The next thing he told me that he spoke to the coaches and they said I must come to training on Monday. They offered a contract and I never looked back and I have to thank Cheeseboy‚ the president‚ the chairman for giving me the opportunity.”