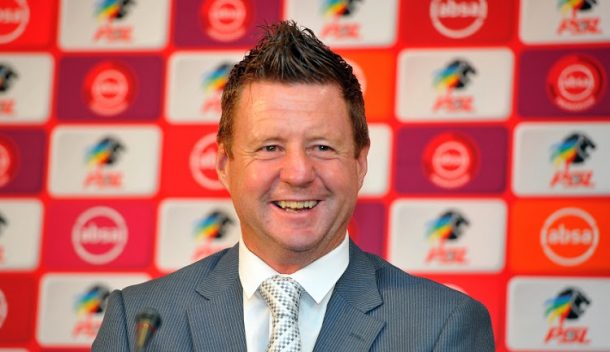 Even with a confusing coaching structure‚ where Dylan Kerr joined the club as head coach but has not concluded the deal yet‚ and is watching from the stands awaiting a work permit‚ Tshakhuma Tsha Madzivhandila (TTM) have undergone a dramatic revival.

The winds of change brought by new owner Abram Sello‚ the Limpopo businessman who bought the team that six months ago was still Bidvest Wits from previous buyer Lawrence Mulaudzi‚ have blown Limpopo-based TTM to four wins in succession.

Mpho Maleka and David Mathebula are still officially earmarked to become assistants to Kerr‚ who joined TTM unofficially in early February to replace Joel Masutha as head coach. With Kerr still in the stands – fulfilling a job description the club calls “a bit tricky” to define‚ though he trains the team and formulates gameplans with Maleka and Mathebula – the assistants are‚ club liaison manager Rufus Matsena said‚ currently the co-coaches.

With Maleka and Mathebula’s phenomenal initial success‚ Matsena says TTM have not ruled out keeping the current formula‚ with Kerr perhaps redirected to an oversight role.

Asked to define Kerr’s situation‚ and if he’s remained in the stands part due to Maleka and Mathebula’s success on the field‚ Matsena said: “You know‚ I’d say ‘yes’‚ but it’s a bit tricky. We offered a contract that has been returned for amendments.”

Asked if Kerr – given he attends trainings – is defined as a consultant at the moment‚ Matsena said: “He is a coach pending the signing of the contract‚ and the work permit coming.

“Mpho Maleka and David Mathebula are co-coaches. It all depends on him [Kerr‚ once he signs] whether he would want to continue with the duo‚ or maybe he would want to get somebody else [as his assistants].”

Matsena suggested TTM might consider a role such as technical director for Kerr. “If things are taking a good direction‚ everything is open for discussion.

“If maybe that would be a role that he assumes‚ so be it. But the bottom line is we wouldn’t want someone assuming a position and then suddenly we start regressing.”

It’s hard to imagine a more confusing coaching system at a club. And yet‚ somehow‚ and perhaps this reflects in some ways on the chaos of the previous ownership too‚ it’s worked so far.

Kerr‚ excitable and hyperactive like an Energiser Bunny‚ conducts an interview on is bike. Not in the sense of the expression: ‘on his bike’‚ and out of another club – literally on a bicycle‚ as these days he cycles “about two-and-a-half kilometres” from his Polokwane home to TTM’s training grounds at Peter Mokaba Stadium.

Asked to clarify his coaching situation‚ Kerr said: “I spoke to the chairman. He asked me if I’d be interested in being the head coach.

“I’ve not signed a contract yet. We’ve agreed. But there are a lot of things that are happening with the chairman. I know he’s very busy. There are issues with former technical directors and former players‚ and contractual issues – so I know I’m the least of his worries.

“Being on the bench – actually‚ I prefer being in the stand because you can see the game better.”

Part of the synergy with Maleka comes from Kerr having been the assistant-coach to Cypriot Akis Agiomamitis when the former striker played at Mpumalanga Black Aces in the 2009-10 season.

“I coached Mpho Maleka 12 years ago at Black Aces. David was part of the MDC team [TTM reserves]‚” Kerr said. “And it’s working at the moment. We’re working well together.”

Maleka was brought in by Sello‚ Kerr – previously coach of Black Leopards (twice) and Baroka FC as he has bounced around Limpopo top-flight coaching jobs – said.

“Mpho’s very good friends with the chairman. Since I’ve been in Limpopo I’ve also spoken to Mpho about every two weeks.

“His work ethic as a footballer was similar to mine as a footballer. You want to get better. And Mpho’s been around the country looking for a coaching job.”

“We’ve just organised them defensively. Also‚ you know how South Africans are very good at playing‚ but the shooting is horrendous. We see it weekly that the chances we should be scoring we are missing. But creating chances is always a positive.

“ … This last week I gave the players four days off. And yesterday‚ when they came back‚ rather than them playing XI v XI we had three v threes on nearly half a field‚ and they had 45 seconds to score.

“They were absolutely knackered but it’s game-related practises where they get something out of it [tactically and physically].”

Matsena said what Sello has brought as chairman is improved organisation off the field‚ and an interest in what’s happening on it.

“It’s a simple administrative issue‚ which is having to run things slightly differently to the previous management‚” he said.

“We have constant monitoring of the training. And if someone is there showing a keen interest in what you are doing you punch above your weight.

“Previously there were issues regarding payments and so on. We make it that you stick to the promise.”

Those sort of basics are a start. A second purchase of a PSL franchise within six months cannot be an entirely smooth process. Now‚ hopefully‚ TTM will figure out their best coaching structure and settle on it. Then again‚ if it ain’t broke … .