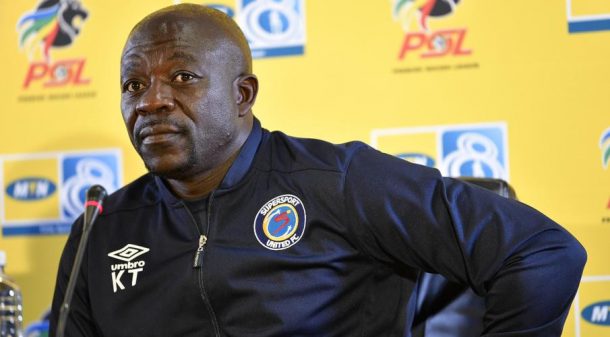 SuperSport United coach Kaitano Tembo says his side will attack Orlando Pirates right from the first whistle in Wednesday’s league clash in Atteridgeville.

United have made a bright start to the DStv Premiership campaign and welcome Pirates at the Lucas Moripe Stadium four points behind leaders Mamelodi Sundowns at the halfway stage.

The 50-year-old Zimbabwean mentor admitted United were lucky to get away with a point in their away draw against Kaizer Chiefs at the weekend.

While United fielded their strong team and were run rugged in the 1-1 draw against Chiefs on Saturday‚ Pirates rested almost all of their regulars on Sunday as they beat Botswana’s Jwaneng Galaxy 1-0 to qualify for the group stages of the Caf Confederation Cup 4-0 on aggregate.

The Buccaneers are expected to have their heavy artillery back for the trip to Atteridgevile and Tembo said United will have to be at their best to defeat Pirates.

“We saw Pirates rested most of their players and so we really need to prepare well and pitch up because we are playing at home‚” said Tembo.

“We have had two or three days to prepare and it’s not enough rest. You can’t really train much because we needed the players to be fresh.”

Be that as it may‚ the SuperSport coach said they will be in an attack mode from the first whistle and he will pin his hopes on Premiership leading goal scorer Bradley Grobler and his towering strike twin partner Thamsanqa Gabuza.

“We know that Pirates are a very good team and have been doing well and pushing to get up the log. They also want to win this game.

“But it’s always important for us to go out there with the right frame of mind‚ play very well and make sure that we attack them from the word go because we are playing at home. We probably [need] to score an early goal to try and unsettle them.

“We need to be a bit smarter‚ especially if we can get an early lead.

“But it’s going to be a very demanding game where we need to bring our A game in terms of our work ethic. A good work ethic will probably get us through.”

United are second on the Premiership log table on 32 points from 17 matches and will look to close the gap between them and Sundowns to just one.

“We need to …keep a little more pressure on Sundowns and try and close the gap.”

The Buccaneers‚ in fifth and trailing leaders Sundowns by eight points‚ will look for a win that will keep them in the picture in the title chase. A win would move them up to third and within one point of Tembo’s team.