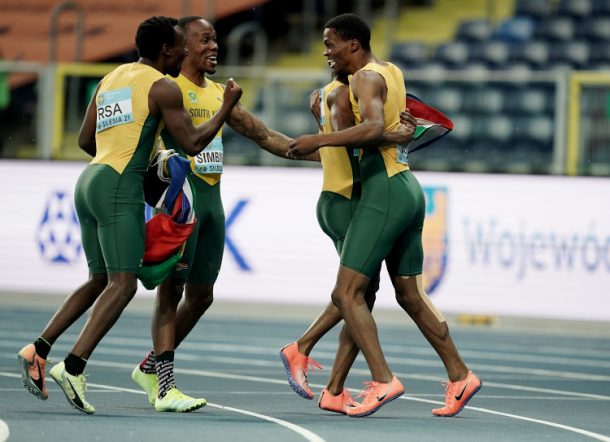 WATCH| SA crowned 4x100m relay kings after dramatic final: ‘The best is yet to come’

The national 4x400m team delivered a memorable performance in the final to edge Brazil into second on the line.

Taking over in second place on the final leg‚ SA record holder Akani Simbine managed to chase down the Brazilian team in the home straight.

With Simbine dipping on the line in 38.71‚ the SA quartet that also included Thando Dlodlo‚ Gift Leotlela and Clarence Munyai secured victory by 0.01 against Brazil.

Brazil‚ however‚ was later disqualified‚ giving Italy the silver medal in 39.21.

“Congratulations to coach Paul Gorries‚ athletes‚ manager Danie Cornelius and all medical staff that have been supporting them‚” Skhosana said.

“I am over the moon as the president of Athletics SA because some people had not seen this project as viable and had strongly opposed it.

“And when I went to Tshwane to talk about housing the coach‚ athletes and getting all the required services‚ those opposing did not see this line of thinking.

“I knew where I was going with this and today I’m so proud that the boys have made this country proud.

“Two teams have qualified for the Olympic Games and we are also world champions in the 4x100m.

“The last time our Rainbow Nation won the 4x400m event was in 2001 at the World Championships.

“I also must dedicate this gold medal and the 4x400m Olympic qualifier to the University of Pretoria for their remarkable contribution and for believing in my vision.

“Deeds and not lip service is what our focus has been all about.

“While others talk about what they want to do‚ we are doing and producing results.

“We are moving athletics forward. We know what needs to be done and have been doing it‚ and not just in the confinement of some province.

“Our results are there to be seen not only in SA but throughout the world.

“So let us be allowed to celebrate the fruits of good work and a fulfilled mandate.

“Tonight’s achievements are a clear indication that we know what we are doing and this is only the beginning.

“The best is yet to come.

“We are number one in the world out of 115 member countries and we have fulfilled what others before us have failed to do‚ while others make empty promises about what they think when‚ in fact‚ they can’t even handle the current smaller responsibilities they have.”

Having progressed as the third quickest team in the heats the day before‚ they completed the four-lap race in 3:05.76 and have automatically qualified for the Olympic Games in Tokyo‚ Japan‚ scheduled for July 23.

The national mixed 4x400m team — Ranti Dikgale‚ Simon Khuzwayo‚ Deline Mpiti and Taylon Bieldt — were sixth in their heat in 3:19.18 on Saturday’s opening day of competition and therefore did not qualify for a place in the final.

If you missed South Africa's 4×100 team win at the #WorldRelays, here it is.

Halala! All the way to the finish line! 🇿🇦 Congratulations @AkaniSimbine and #TeamSA for bringing home the #WorldRelays2021 victory with a 38.71 second win! 🏆 #InspiringSA https://t.co/wwi4Aef1Sl

News: We applaud South Africa's 🇿🇦 #WorldRelays2021 team led by @AkaniSimbine for clinching a gold medal in a sensational victory in the 4x100m race at the World Athletics Relays in Poland. In this breathtaking performance, #TeamSouthAfrica 🇿🇦 clocked a time of 38.71 seconds. pic.twitter.com/BczQ8oQiyM