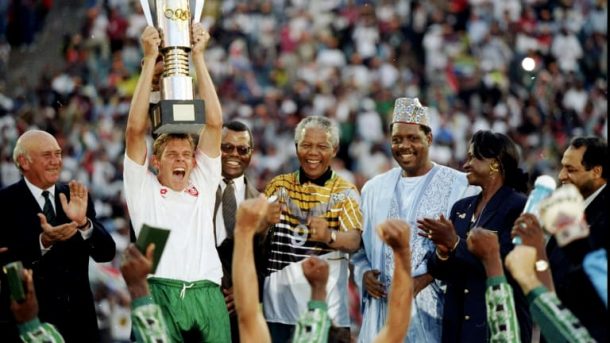 Wednesday marks 25 years since Bafana Bafana won the 1996 Africa Cup of Nations on home soil in one of the greatest moments in South African sport.

The fledgling national team had suffered some embarrassing thrashings‚ victims to their naivety‚ on their return from sporting isolation as South Africa emerged from apartheid to democracy‚ and the country returned to international football in 1992.

However‚ for those who had taken notice‚ the newly-named “Bafana Bafana” had started to play exciting football and earn some strong results in the year-and-a-half prior to the 1996 Nations Cup.

Players such as Lucas Radebe‚ Doctor Khumalo‚ Sizwe Motaung‚ Linda Buthelezi‚ Eric Tinkler‚ John Shoes” Moshoeu and Mark Fish were finding their feet internationally‚ and a spirit was growing under the enthusiastic coaching of Clive Barker‚ who made the team feel like world-beaters.

As Kenya withdrew as 1996 Nations Cup hosts‚ and Africa’s newest democracy stepped in as late hosts‚ the stage was set for Bafana’s finest moment.

Spurred on by president Nelson Mandela’s encouragement and the newly-coined “Madiba Magic”‚ they negotiated confidently through the group stages‚ and beat a tough Algeria 2-1 in the quarterfinals at FNB Stadium‚ where the huge crowds had become a further inspiration to the team’s performance.

Tournament favourites Ghana were blasted away spectacularly‚ 3-0 in the semifinals‚ in what still ranks as one of the best performances by Bafana.

On February 3 a multiracial crowd of 90‚000 crammed 78‚000-seat FNB for the final against tough Tunisia.

After a tense first half‚ Khumalo set up Mark Williams’s opener in the 73rd minute‚ and the striker scored a second two minutes later‚ both goals sparking a deafening roar from the huge crowd. The noise barely subsided for the festival final 20 minutes of normal time plus added time.

In a sign of unity and peace‚ Mandela was accompanied by Zulu King Goodwill Zwelithini to present the trophy to captain Neil Tovey. And the rest‚ as they say‚ is history.

Highlights of the 1996 Africa Cup of Nations final:

Bafana had begun the tournament with a stylish and confidence-inspiring 3-0 win against 1990 World Cup quarterfinalists Cameroon: