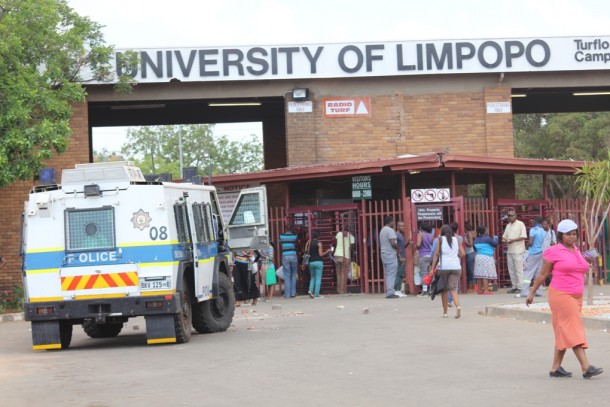 University of Limpopo security beefed up after student shot

Security in and around the University of Limpopo’s Turfloop campus will be beefed up following the shooting of a student this week.

The off-campus incident happened in the ealry hours of Monday morning at the nearby Mamotintane village.

According to police the 25-year-old student had just left his room to answer a call of nature at around 3am when an as-yet-unknown man approached and shot him once in the left thigh.

He is currently being treated at the Polokwane Hospital. No arrest has been made in connection with the incident but police investigations are continuing.

University spokesman Kgalema Mohuba said on Monday that security personnel would be increased in and around the campus to ensure the safety of their students.

“We have agreed with the police in Mankweng to increase the number of police cars patrolling around the Mamotintane area as we have noticed that thugs have moved to areas where we were found to be weak in terms of protection‚” Mohuba said.

He said two cars from the university’s security personnel and two police cars were now patrolling the area.

“We have also encouraged landlords who are housing our students to put in place maximum security‚ if possible employing security personnel… to ensure students are protected.” Mohuba said they would also increase the number of hours for buses from the campus ferrying students to their rental homes at night.

“From now on there will be buses transporting students at 8pm‚ 10pm and midnight‚” he said‚ adding that they would create a WhatsApp group chat that would let students living in the area send alert messages to a central number if they were in danger.

The institution will also hold a summit for communities‚ students‚ police and university management to discuss issues of safety in the area.

Mankweng police spokesman Captain Mohlaka Mashiane said the Mamotintane area had for a long time been under a watchful eye but only a single police van was deployed there.

“And when the shooting incident happened our members were attending to another incident not far from the shooting. We are appealing to community members who may have information about the incident to come forward‚” Mashiane said.

Some students in the area said they were worried about their safety and would not reveal their identities for fear of being targeted.

“We are living in fear‚ especially when we have to attend classes during the night‚ but we have no other option as we need education‚” said a student living next to the campus’ entrance gate.