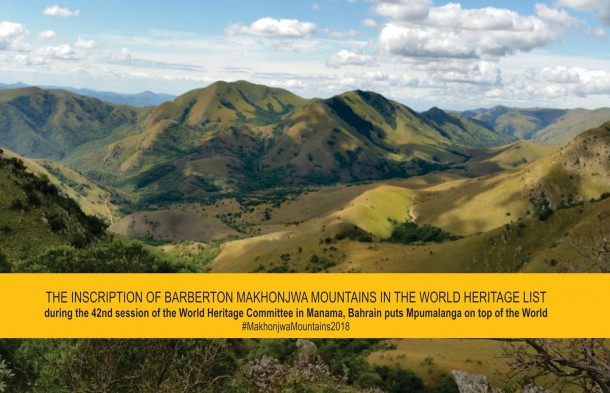 The Barberton Makhonjwa Mountains have been inscribed on the prestigious World Heritage List‚ Arts and Culture Minister Nathi Mthethwa announced on Monday.

“As the government of the Republic of South Africa‚ we would like to make a commitment that we will do all in our power to protect the integrity and the authenticity of this natural property‚” the minister said.

Sites that are deemed World Heritage Sites are recognised as having global historical or environmental significance‚ may signify a phenomenal achievement of humanity‚ or reveal ancient civilisations. The recognition allows the country to access funds for conservation from the World Heritage Fund and may increase tourism to the area. To be accepted onto the list‚ a country must meet stringent criteria and show how the site will be conserved.

The mountains in Mpumalanga are thought to be one of the oldest sites on Earth‚ with its volcanic rocks estimated to be between 3.2 and 3.6 billion years old.

The mountains are also believed to contain the oldest signs of life‚ with a micro fossil of bacteria discovered there that is estimated to be 3.1 billion years old.

The minister said the mountains‚ “have provided an unparalleled source of scientific information on the formation of the early earth from 3.6 billion years ago. Along with their exceptional geology‚ the area is rich in wild plants‚ animals and beautiful scenery.”

There are now 10 World Heritage Sites in South Africa‚ the most in Africa.

Prior to this‚ Mthethwa said‚ SA was tied with Mororcco and Egypt with nine World Heritage Sites each.