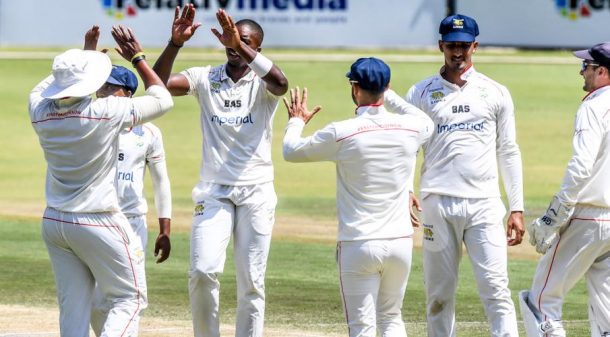 Titans on top after Day One of derby against the Lions

Dominic Hendricks single-handedly carried the Lions with a battling 99 but it was still not enough as the Titans enjoyed a much better opening day of their 4-Day Domestic Series derby in Johannesburg on Tuesday.

The left-hander struck 18 fours in his 151-ball innings as the hosts were bowled out for just 206 at the Wanderers Stadium‚ with three wickets by Lizaad Williams leading the charge for the visitors.

The in-form Aiden Markram then hit an unbeaten 23 to help the Titans reach stumps on 45 for one – behind by 161.

The men from north of the Jukskei currently lead Pool B and are favourites to reach next week’s final‚ with their prospects further enhanced thanks to their strong showing on day one of the final regular season game that saw them earn a full house of bowling bonus points.

After the already-eliminated Lions won the toss and batted‚ they would have been disappointed not to have occupied the crease for longer than the 66.3 overs they faced‚ especially after Hendricks was so solid from one end.

He was the key man throughout‚ helping the home side get to 100 for three during the first half of their innings when they lost Ryan Rickelton (14)‚ Reeza Hendricks (8) and Rassie van der Dussen (6) cheaply.

Temba Bavuma (9) also fell for a single digit score‚ but the Lions still managed to get to a fair 155 for four at one stage. Hendricks‚ however‚ was then taken out by Okuhle Cele (2/41)‚ opening the door for the Titans.

Captain Nicky van den Bergh (41) continued to carry his team forward‚ before he was run out by Williams‚ who then went on to mop up the tail with figures of three for 54‚ handing the away side the initiative. Dayyaan Galiem ended with two for 28.

Kagiso Rabada (1/16) claimed the prize wicket of new national Test captain Dean Elgar for two‚ but Markram and Neil Brand (9) took the Titans to the close without further damage.