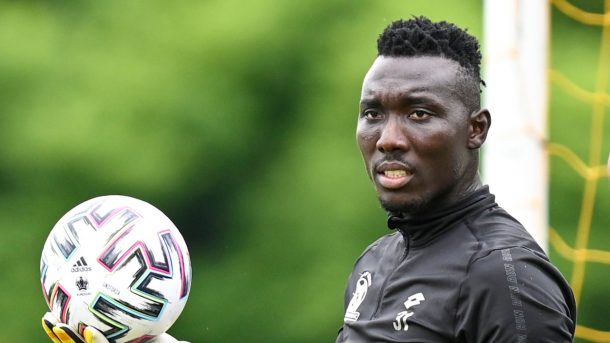 Maritzburg United coach Eric Tinkler has resigned himself to losing the club’s number one goalkeeper Richard Ofori to persistent suitors Orlando Pirates just days before the start of the new season.

Tinkler revealed on Tuesday that the 26-year-old Ghanaian is in talks with Pirates and he admitted that the likelihood of the in-demand player relocating to Johannesburg is increasing with each passing day.

“Ja Richard (Ofori) is in negotiations with Orlando Pirates and as we stand now Richard is still a Maritzburg United player‚” Tinkler said.

“But discussions are taking place between Orlando Pirates and Richard Ofori.”

While Tinkler did not give further details about the negotiations‚ it will not come as a surprise if Ofori is already gone by the time Maritzburg meet Kaizer Chiefs in an MTN8 quarterfinal match on Sunday.

Maritzburg have Bongani Mpandle and the untested Jethren Barr as options in goal‚ which may force Tinkler to find another goalkeeper before the Premier Soccer League’s transfer window closes on November 17.

Ofori joined Maritzburg three years ago and has been a vital cog in the Team of Choice defensive machinery during the period.

Such has been Ofori’s influence in the club that he was handed the captain’s band last season and went on to lead the side to a respectable seventh place finish that confirmed the tricky meeting against Chiefs.

The KwaZulu-Natal side have not done much business in the transfer market during this window but their acquisition of former Mamelodi Sundowns striker Ali Meza last week did not go unnoticed.

Tinker revealed that he had been eyeing the Venezuelan striker for some time and when he became available‚ quickly urged the club’s owners to snap him up.

“I had Ali Meza here last season and there was a potential of taking him on loan‚” said Tinkler of the quicksilver striker.

“He came at the beginning of the season (2019-20) to play a friendly against (Bidvest) Wits and spent three days with me.

“He fitted in like a glove as he understood how I wanted us to play‚ he’s a good footballer.

“So he fits perfectly into the way I want us to play and so when I heard about his availability‚ I obviously spoke to my chairman Farook Kadodia about the possibility of us bringing him here.

“A lot of credit obviously needs to go to my chairman for also managing to bring the boy here. I also needed to be honest to Ali Meza because he enjoyed the experience of being coached by me a for couple of days or three days.

“He was always speaking to Jeremy Brockie (who was a loan to Maritzburg last season from Sundowns) telling him that he wants to be coached by me. Ja‚ that’s what happened.”

Tinker said he expects a different and a fired up Chiefs on Sunday under the guidance of their new coach Gavin Hunt.

“It’s going to be an extremely different team‚” said Tinkler of the team they beat twice (away in the league and in a cup match) last season when they were coached by Ernst Middendorp.

“Gavin Hunt has shown that he’s an astute coach. He’s won the league (four times) and cups (three) and those players are obviously going to be highly motivated to show their worth to Gavin.

“You know that Gavin is a winner and he plays a particular brand of football that’s difficult to compete against. I think last season Kaizer Chiefs were very good‚ particularly on the set-pieces‚ and I think with Gavin that’s going to continue if not get better.

“I don’t think we can compare last season to the coming season.

“We need to play and prepare ourselves extremely hard because it’s going to be a tough battle. They’re always are (the battles) when you play against a team coached by Gavin Hunt.”