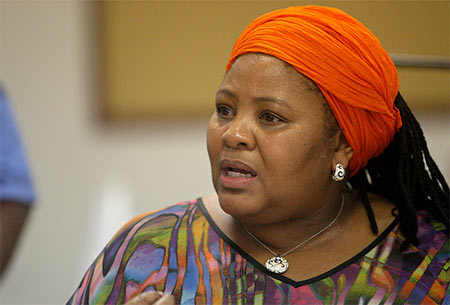 Thuli Madonsela can investigate me over ‘smuggling’ woman into SA: Defence Minister

Minister of Defence Nosiviwe Mapisa-Nqakula says she welcomes an investigation by Public Protector Thuli Madonsela as well as the African National Congress‚ if they decide to do so.

Her statement comes amid controversy around the circumstances surrounding her transportation of a Burundian national to South Africa in January 2014.

According to reports‚ Mapisa-Nqakula smuggled Michele Wege‚ 22‚ into South Africa aboard a government jet in 2014 after travelling to the Democratic Republic of Congo (DRC) where Wege had been arrested for trying to board a flight to South Africa by using a fraudulent passport arranged by Mapisa-Nqakula’s sister‚ Nosithembele.

The Sunday Times reported on Sunday that Mapisa-Nqakula’s late son was romantically involved with Wege. It said that businessman Laurent Wege claimed his daughter Michelle was planning to marry Chumani‚ who was stabbed to death in October last year.

Wege also lifted the lid on a business relationship with the minister gone sour‚ and denied Mapisa-Nqakula’s claims that she had “rescued” Michelle from being abused by him‚ contradicting the reasons Mapisa-Nqakula gave the Sunday Times.

In a statement on Friday‚ the Minister said she had briefed ANC officials on Wege‚ and “indicated that I would welcome an investigation by the National Officials of the Organisation into the matter”.

“I have also noted from media reports that the Democratic Alliance has referred the matter for investigation to the Public Protector and I welcome such an inquiry by her Office‚ should she accept to investigate the matter.

“Although I know that this will be a difficult journey for all involved‚ I nevertheless believe it’ll be in the interest of my responsibility and duty to be accountable to the people of South Africa whom I serve. I have always cooperated with the Office of the Public Protector and I believe such investigation will give me the opportunity to present all the facts for consideration‚” she said.