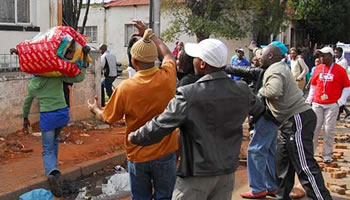 The South African National Civic Organisation (Sanco) on Monday lauded the 24-year jail sentence given to a 26-year-old man for the rape his 86-year-old grandmother.

The sentence will serve as a deterrent and send a harsh message to perpetrators of heinous sexual violence that there is no place in our society for those who violate‚ defile and abuse the elderly in the sanctuary of their homes‚” Sanco national spokesperson Jabu Mahlangu said.

Mahlangu urged communities to unite in intensified action against the scourge of rape as well as gender based violence and to protect the elderly throughout the festive season.

“Women and girl children‚ including the elderly‚ must feel safe in the sanctuary of their homes and free to walk their streets as well as neighbourhoods at any time of day without looking over their shoulders in fear of being victims of vile and despicable acts‚” he said.

The Nelspruit Regional Court on Thursday established that on December 30‚ 2012 at around 2am‚ the victim was asleep at her home in Pienaar just outside Mbombela‚ and was woken up by a noise. She went to investigate and saw that her kitchen door was wide open. She tried calling her grandson but he did not respond. Suddenly someone violently grabbed her from behind and proceeded to rape her. The attacker was actually her grandson.

“I tried to scream but I was helpless and there was no one to rescue me‚” she said.

Her grandson stole her cellphone and some cash before fleeing‚ but was subsequently arrested and convicted.