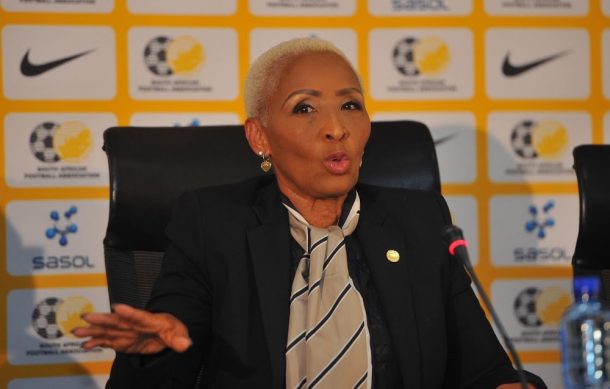 Long-time SA football administrator Ria Ledwaba is heading for a collision course with the South African Football Association (Safa) after she vowed to challenge her removal from her seat as one of the mother body’s vice presidents.

Ledwaba and former acting CEO Gay Mokoena were removed from their seats as vice presidents after a dramatic and emotional national executive committee (NEC) meeting that lasted almost 10 hours on Saturday.

She was accused‚ among other things‚ of disregarding football protocols and stepping outside of the sport’s strict internal procedures after she wrote a letter to sports minister Nathi Mthethwa asking for intervention in the manner in which some controversial affairs had been handled‚ specifically by Safa president Danny Jordaan.

But Ledwaba told TimesLIVE on Sunday that her fate was determined long before the letter she wrote to Mthethwa became public knowledge and she has WhatsApp messages to prove that Saturday’s marathon meeting was a mere formality.

“I cannot just leave it unchallenged because there are a lot of flaws (in the procedures related to her removal).

“In fact‚ I will show that I was removed long before (Saturday)‚” she said.

“I have got WhatsApp messages where the NEC members have already suggested that (her removal).”

Safa communications director Dominic Chimhavi said the procedures that led to Ledwaba’s removal were to the book but she’s within her rights to challenge the decision.

“Everything that was done by the NEC on Saturday was according to the book‚” Chimhavi said on Sunday.

“The fact is the vice presidents are appointed by the NEC.

“The NEC has the right to recall those vice presidents if they veer off the course‚ or their conduct is unbecoming and unprofessional‚ which in this case was interrogated by the NEC on Saturday at length.”

“They (Ledwaba and Mokoena) were given an opportunity to explain themselves but their arguments were so unconvincing that they left the NEC with very little choice but to recall them.”

Chimhavi confirmed that the NEC also interrogated the report authored by former acting CEO Gay Mokoena and they ultimately elected to unanimously reject it on the basis that it contained many claims that could not be substantiated.

The report emerged a few weeks ago making several allegations of abuse of office against Jordaan.

A second report‚ a 71-page document from former CEO Denis Mumble‚ followed the one released by Mokoena also making claims of abuse of office against Jordaan.

Ledwaba said she would continue to fight against her removal and would not turn a blind eye to the allegations made by Mokoena and Mumble.

“I want to say that I cannot allow the systems of Safa‚ which has a constitution that we rely on‚ to be violated on a daily basis and there’s nothing wrong with that‚” she said.

“I really want to challenge it‚ I have not applied my mind yet but I am at peace with myself because I think I stand for the truth. The truth being that the report of Gay Mokoena and the report of Dennis Mumble must be sent to an independent body …….. because I cannot live with myself while I do not know whether what Dennis is saying is true or not. I cannot simply dismiss it on that basis.”

The long-serving official said it was a shame that she has been removed from her seat when the domestic game is crying out for women in influential positions.

“It’s an unfortunate situation when we have so few women in the national executive committee and you must be sacked just like that‚” she said.