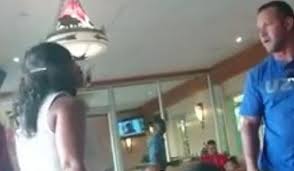 Spur Corporation issued an unequivocal apology on Wednesday to a mother who was threatened with a “klap” by a fellow diner during a heated argument over their children at the weekend.

Video footage of the altercation at Texamo Spur — in The Glen Shopping Centre in Johannesburg — on Sunday went viral on social media and the food chain was sharply criticised for the way it was handled.

Lebohang Mabuya‚ who was threatened by a father at the restaurant during an argument over the behaviour of their children‚ told The Times that his behaviour was “intimidating and disrespectful“.

Spur has apologised to Mabuya and confirmed that a review of their own CCTV footage showed that the man had grabbed her child “in an aggressive manner and his actions are unacceptable”.

“We have reviewed our CCTV footage of the incident and can confirm that Ms Mabuya’s version of events is accurate‚” said a statement issued by Spur.

“We affirm our decision to ban the male customer from our stores‚ physical aggression towards our customers‚ particularly against women and children will not be tolerated.

“We acknowledge that the staff and management of the store did not sufficiently assist Ms Mabuya. We have addressed this with the store management and we are reviewing our internal procedures to ensure that restaurant staff are better equipped to manage an incident such as this. We also recognize that Ms Mabuya apologised in recent media statements for her inappropriate language used in this incident.”

Spur CEO Pierre van Tonder added; “We will be talking to Ms Mabuya directly‚ at her convenience‚ and will apologise for what she and her family experienced.

“We will also offer her and her family trauma counselling and any other support where we can. I would like to again make it very clear that as an organisation we do not condone any forms of violence against women or children‚ irrespective of the circumstances.

“As an organisation we have learnt a valuable lesson and it is my priority at this stage to ensure that should something like happen again‚ our staff will be sufficiently prepared.”

TMG Digital has made several attempts to speak to the man involved in the altercation — without success — to hear his side of the story.

Marilize Lloyd‚ who was with the man and his family at the restaurant‚ told TMG Digital that Mabuya had fired the first salvo in the dispute.

“Her direct comment was: ‘You can go f*** yourself’‚” said Lloyd‚ after the man’s daughter complained she had been hit.