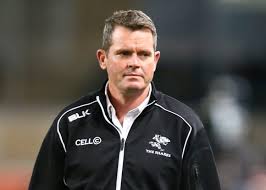 With the Sharks on the final leg of what’s proving to be a successful Australasian tour‚ their coach Sean Everitt says their simple ingredient is team work.

The Sharks have won two out of their three games. If they can see off the Reds in Brisbane on Saturday‚ they’ll have won three from four.

With a challenging home return in the form of the Jaguares on March 7‚ the need to beat the Reds is paramount.

With the unity the Sharks have displayed on the field‚ success in Brisbane isn’t beyond them.

“The guys are playing for each other and you can see that from week to week. The consistency in their performance shows that but for Makazole Mapimpi to give up his hattrick for Curwin Bosch to score a try in his 50th match is something special‚” Everitt said.

One of the keystones of the Sharks’ flavourful rugby is Bok number eight Sikhumbuzo Notshe.

While his Bok path was blocked by Duane Vermeulen‚ he’s unleashed a brand of rugby that’s fitted in like a glove with the Sharks.

Everitt has been quick to note the immediate impact Notshe has made this season.

“Notshe has been one of the outstanding players in the Sharks pack. It’s good to have a number 8 who links well with the forwards and backs.

“Although he’s not a big a physical player‚ he’s got tremendous skill and he’s one of our dominant carriers‚ but in a different capacity‚ rather than running over players and uses his feet well‚” Everitt said.

“He’s got a very good offloading game and we saw that against the Highlanders where he put Madosh Tambwe through. He contributes well to the team and he’s a leader in his own right and a very good signing for the Sharks.”

Then there’s Aphelele Fassi‚ the lanky‚ yet pacy fullback who’s made things happen for the Sharks at the back.

“He’s really grown quickly. When he came out of school‚ he was an attacking player from the back but he’s grown into an all-round player.

“He’s almost there‚ but he’s still got a lot of work to do on his game as far positional work is concerned. He’s been scintillating and in great form. He’s a keen learner and an intelligent young man.”

While the Australian teams haven’t quite established who the best of their generally sorry lot is‚ the Reds have a forward pack with a fair punch and a back division to make parity or dominance work.

Getting a win in Brisbane will be easier said than done.

“They are a dangerous team and they’ve got a formidable tight five. They scrum really well and they’ve given all the teams they’ve played against problems at scrum time.

“We saw that in the Lions game and saw that on the weekend‚” Everitt said.

“They also have James O’Connor who is flourishing at flyhalf.

“They are a dangerous team that also scores tries. They’ve got Henry Speight and he’s menace on attack. We really have to be sharp defensively to keep them out.”