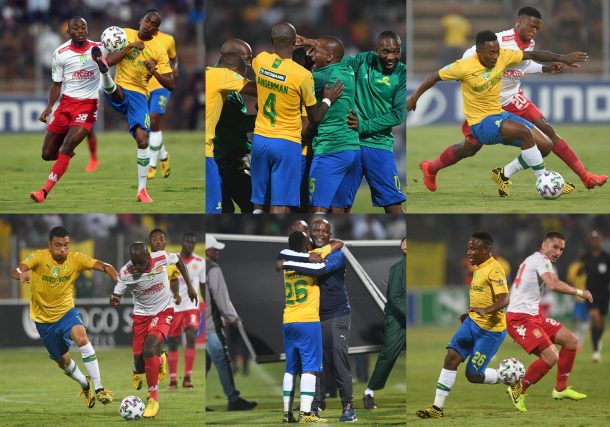 Sundowns were made to play the way they do not like to at a packed Makhulong Stadium on Saturday night for the 75 minutes of the second half plus extra time – on the back foot and without their normal lions’ share of possession.

Highlands’ focus would also have been affected by losing three players making big contributions on the night to injury‚ but they still kept the pressure on Sundowns until Keletso Makgalwa’s 115th-minute winning strike.

But having centreback Bevan Fransman replaced by Luckyboy Mokoena; midfielder Makhehleni Makhaula replaced by Ryan Rae‚ and fullback Richard Mbhele taken off for Reneilwe Letsholonyane had to disrupt Highlands’ plans.

Da Gama said it was the decisive factor in the match.

“From a tactical perspective to see a team like Sundowns park the bus was a bit strange. But I thought the boys played very well‚” Da Gama said.

“I think the unfortunate thing that happened to us was the forced substitutions. And Peter Shalulile had to finish with an injury. It was very unfortunate.

“And to lose with two schoolboy errors there – you give the ball away so easily in the midfield‚ and then you slip at the back [by Rae] – was unfortunate.

“We take it on the chin‚ we grow as a team and we keep on learning.”

Da Gama was denied tactical substitutions by the injuries. The coach’s tactics for the game‚ though‚ were solid.

“From a tactical perspective we knew they wanted [centreback Ricardo] Nascimento to play the ball‚ we knew [Hlompho] Kekana was going to play the ball‚” the former Bafana Bafana assistant-coach said.

“We said let’s force [Motjeka] Madisha to play‚ let’s force the other players to play. It worked well for us. We started getting a lot of possession from that.

“With the shifting from our side we forced them to play the way they didn’t want to play.

“We didn’t want them to get the ball to [Jose Ali] Meza and Sibusiso Vilakazi in the middle – so we just forced them wide.

“But they are a quality‚ very experienced team. They just waited for the one opportunity. Unfortunately it was a mistake on our side.”

The PSL have suspended this week’s matches – pending a meeting of their board of governors on Thursday to explore all options – in response to State President’s national emergency on the coronavirus outbreak.