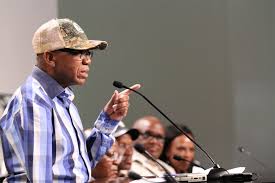 SACP and MK veterans agree to a ceasefire

The two organisations, which have been engaged in public spats for some time, buried the hatchet on Monday after a “crucial” meeting in Boksburg on the East Rand.

The main grievance communist party leaders raised with the MKMVA was factionalism and the association’s perceived close relationship with the controversial Gupta family.

t is understood that SACP leaders told the MKMVA delegation that the behaviour of MKMVA was inconsistent with its history and was problematic.

The SACP and MKMVA have previously disagreed sharply in public, especially on the issue of the Guptas, who are said to be close friends of President Jacob Zuma. The communist party slammed Maphatsoe, accusing him of behaving like a spokesman for the Guptas.

It also characterised the Guptas’ accumulation of wealth as that of “parasite bourgeoisie”.

On the other hand, the MKMVA lashed out at the SACP and its youth wing, the Young Communist League (YCL), after the YCL berated Maphatsoe, saying he ran away from an ANC camp in exile.

However, Maphatsoe, who is also the deputy defence and military veterans minister, refused to divulge what was discussed.