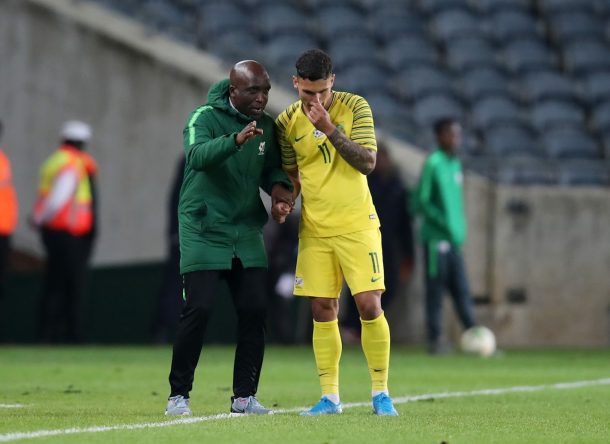 SA under-23 coach David Notoane has named a provisional squad of 25 experienced players for the Tokyo Olympic Games preparation matches and included 11 members of the overseas contingent on his list on Tuesday.

Notoane’s charges are heading to the United Arab Emirates where they will face Brazil‚ Korea and Argentina in the friendly games from June 5-11.

“We are looking to bring in and integrate our foreign-based players to see what they can bring to the group in terms of increasing the level of our quality‚ and also addressing some key challenging positions‚” he said.

“Ja‚ we hope that we will get all the players that we require to integrate into this preparation camp going to Dubai to play three games against Brazil‚ Korea and Argentina. This should give us a very good measure as an objective of the level of our players in terms of readiness to [then] do well at Olympic Games later on in July.

“We are looking forward to having a combined team that provides continuity‚ but [we will] also give [a chance to] some [foreign-based] players who have done very very well abroad‚ namely Sphephelo Sithole‚ Luther Singh‚ whom we haven’t seen for a long time‚ Gift Links‚ Thabo Cele and the like.

“[We want] to try and integrate them into the local players that we have so far been happy with to really give South Africa a formidable team that can go represent us well at the Olympics Games. The upcoming camp in Dubai is one that kick-starts our preparations for the Olympic Games.”

This will be the SA men’s under-23 team’s third trip to the Olympic Games after crashing out in the group stages of the 2000 Games in Sydney‚ and in the showpiece that was held in Rio de Janeiro in 2016.

The Tokyo Olympic Games were delayed by the outbreak of the coronavirus pandemic and postponed from 2020 to this year.

SA’s under-23 men’s national team squad for the UAE tourney: