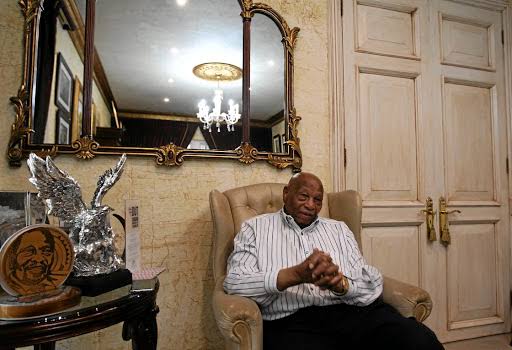 He celebrated his 99th birthday on December 24.

His death came after a short illness‚ a spokesperson said in a brief statement.

The family requested privacy “during this time of grieving”.

Funeral arrangements will be announced in due course.

In November‚ despite his age‚ Maponya said he was so concerned about the low employment rate in the country that he was planning to open an academy to train the youth on how to be entrepreneurs.

“Right now I am trying to come with an institution that must train all our youngsters so that when they graduate they get trained to use their own hands and be able to get employed or get into business in their own right‚” said a post on his Facebook page. He said he was searching for financial and non-financial support to make his dream a reality.

It was a lifelong goal.

Maponya was the founding president of the National African Federated Chamber of Commerce and Industry (Nafcoc)‚ which was started in 1964 to serve the interests of small businesses.

At the age of 82‚ he said: “We need to create jobs for our people. That is my primary objective. I have been blessed beyond measure and am able to put food on the table; I want the same for others.”

Maponya‚ renowned for building a business empire despite apartheid-era restrictions‚ was last month wished happy birthday by President Cyril Ramaphosa‚ who said: “I urge young South Africans to research the life story of this great legend‚ and draw lessons from how he overcame adversity to become one of the greatest pioneers and success stories of our time.”

The business legend had trained as a teacher‚ before starting small grocery stores in Soweto in the early 1950s. These led to various businesses‚ including a butchery‚ liquor stores and supermarket‚ car dealership and filling station.

The most visible sign of Maponya’s success is his 65‚000m² Maponya Mall in Soweto. In 2007‚ former president Nelson Mandela cut the ribbon at the opening of the landmark township development.