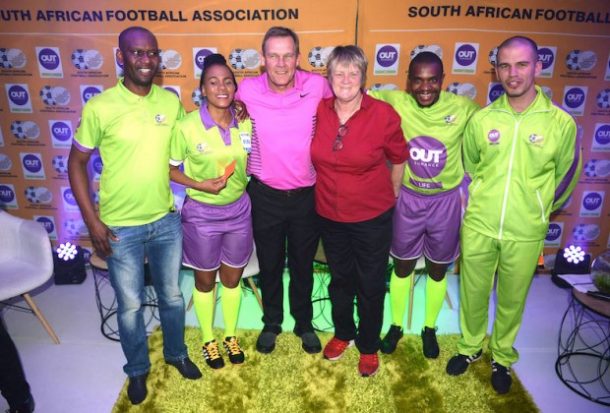 The Premier Soccer League (PSL) has won its battle with the SA Football Association (Safa) over the association’s referees’ sponsorship deal with insurance giant OUTsurance.

TimesLIVE has established that Arbitrator Advocate Paul Pretorius handed over his ruling recently‚ which favoured the PSL more than it did Safa. But it seems the PSL may not have won the war as the mother body is considering to appeal.

The R10m-a-year five-year sponsorship‚ apparently tailored to semi-professionalise refereeing and improve the remuneration of officials‚ was announced by the insurance giant and Safa in September 2018.

The deal rubbed the PSL bosses the wrong way as it resulted in referees‚ who are controlled and assigned by Safa‚ wearing OUTsurance’s bold lime and maroon colours at domestic matches falling under the auspices of the PSL.

The PSL rejected the deal and argued that it infringed upon the rights of their main title sponsor Absa and Cup sponsor Nedbank‚ who both also play in the insurance space.

Absa have not renewed their contract that expires on Saturday September 5 and it is not clear if another bank will take over as Premiership title sponsors or not.

Safa dismissed the PSL’s concerns as nonsensical and pressed ahead with the deal.

The PSL subsequently lodged a dispute and match officials stopped wearing the kit branded with OUTsurance logo and colours for Absa Premiership and Nedbank Cup matches.

With OUTsurance not happy with the stand-off‚ Safa and PSL agreed to bypass appeal processes and headed straight for arbitration in a bid to fast track the process and settle the dispute that has now dragged on for two years.

TimesLIVE has established that arbitrator Advocate Pretorius‚ the star evidence leader during the first part of the Zondo Commission of enquiry proceedings‚ ruled that the insurance company is not prohibited to advertise in the way that they are currently doing.

Pretorius said it is not his place to comment on the contents of his ruling and referred queries to both Safa and the PSL on Tuesday.

“An award (ruling) was awarded by me but you must talk to the two parties involved‚” Pretorius said.

A source with knowledge of the arbitration said the ruling did not completely nullify the sponsorship contract but placed limitations.

“The Arbitrator ruled that the insurance company can continue to advertise but not in the way that they (OUTsurance and Safa) want it with screaming purple and maroon company colours and a gigantic logo on the front of the match official’s kit.

“They are allowed a badge somewhere on the kit but not the uniform.”

The source said the OUTsurance bold colours will fall away completely with the company logo moving to the side of the sleeve on the referee’s jerseys.

TimesLIVE has established that the terms and conditions of the sponsorship contract will now be aligned with the limitations contained in the Fifa referee’s regulations.

It is understood Safa were emboldened in their decision to appeal by the fact that Absa’s contract with the PSL is coming to an end on Saturday.

The mother body is believed to be of the view that with Absa out of the way a conflict of interest falls away and OUTsurance can continue to advertise with bold colours and logo barring the Nedbank Cup matches.

Safa CEO Tebogo Motlanthe declined to engage with TimesLIVE on the matter.

Asked if Safa is appealing‚ he said “we have absolutely no comment on the matter.”

Dario Milo acted on behalf of the PSL and said on Tuesday “I will refer you to someone at the PSL” but did not do so or provide the name of the contact person at the League at the time of publishing.

PSL acting CEO Mato Madlala claimed to be unaware of the arbitration award.

“I don’t know what you are talking about‚ I am not aware of the arbitration award you are referring to‚” she said on Tuesday.

Head of client relations at OUTsurance Natasha Kawulesar did not respond to emailed questions at the time of publishing.

“1. In competitions organised internally by the member association (Safa)‚ the Member Association may authorise sponsor advertising on the shirts worn by match officials.

“4. Revenues from sponsor advertising contracts should be reinvested in refereeing matters.”