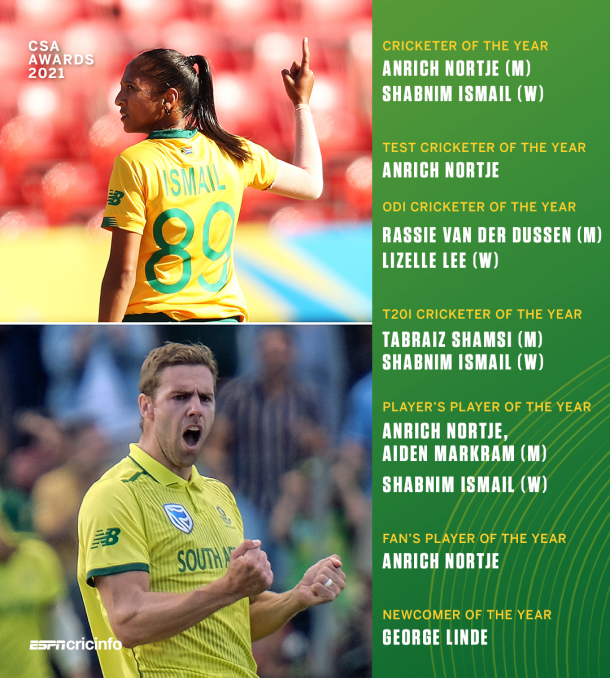 As a first time visitor to the Caribbean‚ Proteas quickie Anrich Nortje has no idea how the conditions are going play out for fast bowlers in their two-match Test series against the West Indies in St Lucia this month.

The Proteas‚ who are on their first bilateral tour to the Caribbean since 2010‚ left on Monday night for the exotic island region for the two Tests scheduled for June 10-14‚ and June 18-22 at the Daren Sammy Cricket Ground.

Nortje‚ who was on Monday named as Cricket SA’s Men’s Cricketer of the Year‚ said he is excited to be going on tour in the West Indies‚ even though the wicket is going to be slow and low.

“I am very excited to be going to the West Indies because I have never been there‚” said Nortje‚ who is part of the fast bowling attack that includes the explosive power of Kagiso Rabada‚ Lungi Ngidi‚ Beuran Hendricks‚ Wiaan Mulder‚ Lizaard Williams and Marco Jansen.

The fast bowlers will be ably assisted by spinners Keshav Maharaj‚ Tabraiz Shamsi‚ Prenelan Subrayen and George Linde‚ who are expected to play a big role on favourable slow conditions.

“I have heard lots of stories about the conditions in the West Indies and I am not too sure how it is going to be with fast bowling‚ but I am excited to go. It is not easy knowing that conditions may not favour you as a bowler‚ but all in all is it just about doing the basics.

“If we can get the basics right‚ concentrate more and try to hit top of off-stump for longer periods‚ hopefully something will happen for us. Even though the conditions may not favour us fast bowlers‚ I think we can still do a good job if we do our basics right.”

Nortje said he is expecting a tough battle against the West Indians who will be motivated as they are playing at home.

“My observation of the West Indies players is that they are generally relaxed and like to express themselves on the field‚” he continued.

“All in all there will be will be good competition on the field especially‚ when their tails are up.

“They won’t stand back [and will] express themselves. They are going to [come] us and that will make for a good challenge. But we must just stick to our basics‚ stick to our strengths and hopefully we will win the series.”

“To be honest‚ I didn’t think about the awards because it has been such an up and down season. But getting six nominations was awesome. I had a decent season and I was only focused on the next game every time.

“Here and there we had some tough talks with the coaches about me upping my game and certain areas where things could have been better. I think all in all it has been a good season with how I progressed and my cricket has gone on.

“Some of the highlights of my career so far have been in Test matches like playing against India‚ going on to play against England and then against Pakistan. Those were some performances that I personally enjoyed. To get a fifer in Pakistan was something special‚ with the Test matches there has been some special moments for me.”