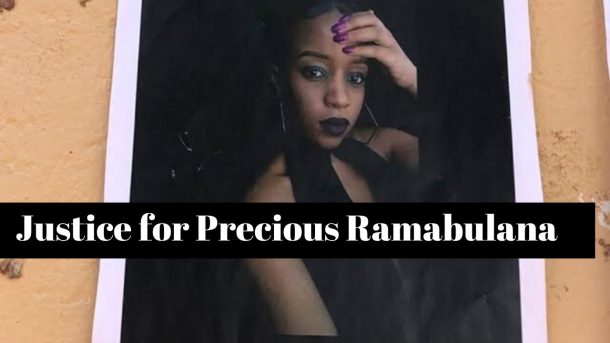 A 28-year-old man‚ arrested for the murder of Precious Ramabulana‚ was allegedly found in possession of her cellphone‚ bloodstained clothes and a sharp object‚ said the family.\

The Capricorn TVET College student was brutally murdered at about 2.30am on Sunday morning.

He was arrested after an operation involving Crime intelligence‚ the Directorate for Priority Crime Investigations and forensic and detective services‚ according to police.

“We are confident that we have the right suspect in custody and that he has a case to answer to. The investigating team must be applauded for speedily apprehending the suspect‚” said MEC for transport and community safety Namane Dickson Masemola.

The family told TimesLIVE the man was apprehended after he was tracked down using Ramabulana’s cellphone.

“Police informed us that the man claimed to be Precious’s boyfriend. They tracked him down using Precious’s other phone. He removed her SIM card and inserted his‚ they found him with the object he used to stab her and clothes full of blood. DNA tests confirmed that it was Precious’s blood‚” said family spokesperson Mavis Sitholimela.

Preliminary police investigations revealed that Ramabulana was asleep in her room at Ga-Joel Section in Mokomene when she was stabbed to death.

Sitholimela said the family last had contact with her at the weekend.

“She called us and told us she was scared because there was someone walking around her window. We asked if she had called the police and she said yes‚ she had asked a neighbour‚ who is also friend‚ to contact them.”

Police arrived at Ramabulana’s locked room while she was still alive. They broke in and‚ while speaking to her‚ she succumbed to her injuries‚ according to Sitholimela.

The family said it hoped justice would be served.