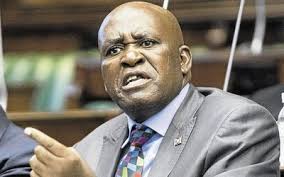 Controversial Hawks head Major-General Berning Ntlemeza believes he has the authority to tell the National Prosecuting Authority how to do its job – to dictate to it on what cases to prosecute and which to review.

Days after the Hawks case against the suspended boss of the Independent Police Investigative Directorate, Robert McBride and two of his subordinates, collapsed in court last week, e-mails have emerged that show Ntlemeza’s ambitions to have complete control over NPA investigations.

Last year he questioned the authority of former NPA headMxolisi Nxasana to review the McBride case and demanded that the docket be returned to him (Ntlemeza). He gave Nxasana a 24-hour ultimatum.

McBride and his co-accused – Innocent Khuba and Matthew Sesoko – appeared in court for allegedly altering a report on the involvement of former Hawks boss Anwa Dramat and Hawks Gauteng commander Major-General Shadrack Sibiya in the rendition of 12 Zimbabweans to their country in 2010 and 2011.

Ten of the Zimbabweans were political dissidents and two were wanted by that country’s authorities for a policeman’s murder.

In Ipid’s original report, Dramat and Sibiya were said to have had knowledge of, and been involved in, the renditions.

None of the crime intelligence officers involved in the renditions wasprosecuted.

The two Ipid reports – the original and the “altered version” – were reviewed by Sandile July of Werksmans Attorneys on the instructions of Police Minister Nathi Nhleko.

The review was made at the same time as the Hawks launched their own investigation because, said police sources, Ntlemeza was angry that Dramat and Sibiya had been exonerated.

It was July’s refusal to testify about his review of the two Ipid reports – and the refusal of those he interviewed in his report to give evidence against McBride – that resulted in the case being dropped.

The e-mails, sent in March 2015, show that Ntlemeza gave Nxasana 24 hours to return the docket to him.

That e-mail was sent six days after Nxasana took North Gauteng director of public prosecutions Sibongile Mzinyathi to task for leaking an internal memo to Ntlemeza in connection with the McBride case.

“We would appreciate it if we may get the docket and the director of public prosecutions’ decision at your earliest convenience but not later than the close of business on Wednesday, 25 March 2015.”

Hawks spokesman Brigadier Hangwani Mulaudzi said the contents of the e-mail did not constitute interference in the affairs of the NPA.

He said the correspondence was between two heads of departments to clarify the delay [in a decision to prosecute] and “not to interfere with the administration of justice”.

NPA spokesman Luvuyo Mfaka said the NPA exercised its prosecutorial discretion independently and no department could dictate to it.

But the SA Police Union and Ipid said the tone of the e-mail smacked of interference.

“The e-mail confirms conflict of interest [because] both Hawks and Crime Intelligence officers were involved [in the rendition]. Hawks members were subjects of the investigation, so how do they justify demanding that they receive the docket?

“Once we have gathered information we will decide whether to investigate this [interference].”

Union president Mpho Kwinika said the police and the NPA were governed by separate acts, which made them independent of each other.

“You cannot have one departmental head making demands on another. If the NPA tells the police there is no case, it has to be accepted. Do not pursue them and ask why the matter is not prosecutable. That becomes interference,” Kwinika said.

“Ntlemeza has been shown by the courts to be a liar. Questions must be asked: Why has the national police commissioner not taken action against him?”

Francis Antonie, director of the Helen Suzman Foundation, which is taking Ntlemeza to court next month with regard to his appointment, said: “Once you go into the world of lies it becomes irredeemable. Someone like this can’t run the country’s most important policing agency.”

“This man’s condescension is breathtaking. “