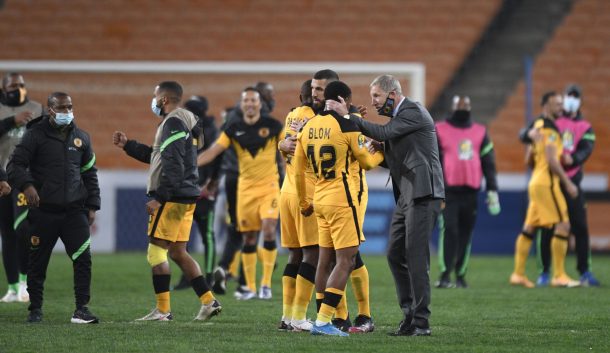 Pitso Mosimane on threat posed by Chiefs: ‘Those guys really are soldiers‚ they are survivors’

Kaizer Chiefs’ high threshold for absorbing pain and their tenacity are what make them so “awkward”‚ Al Ahly coach Pitso Mosimane has explained of his July 17 Caf Champions League final opponents.

The term “awkward football” has been used by Mosimane to describe Chiefs going back to when the coach’s Mamelodi Sundowns pipped Ernst Middendorp’s Amakhosi to the post in the last half hour of the 2019-20 DStv Premiership.

Having never reached a group stage‚ after finishing eighth in the 2020-21 Premiership‚ and desperate to end six seasons without a trophy in style‚ Chiefs are the rank underdogs again to nine-time and defending champions Ahly.

But they are dangerous for precisely those reasons‚ and because a place in a final is already a victory to them‚ so they have less to lose.

Chiefs also showed in their 1-0 aggregate semifinal win against Wydad Athletic that they have no qualms throwing their existence into defence to negate the mismatches at this stage of the competition.

Mosimane‚ speaking in a press conference of the SA Football Journalists’ Association (Safja)‚ explained why Ahly need to respect their final opponents.

“The rigidness of the midfield‚ the hard working of Bernard Parker‚ the element of Samir Nurkovic and Leonardo Castro; and Erick Mathoho‚ [their] set pieces‚” Mosimane said‚ asked to define what it is that makes Chiefs awkward.

“The rigidness of not giving much away. [That they] don’t care if they have the ball or not. They can suffer in a match – no problem.

“So there’s tenacity. We have to give respect to that. Those guys really are soldiers‚ they are survivors.

“And also‚ I think [caretaker coach] Arthur Zwane wanted to give it a go and we should give him respect for that – he has done exceptionally well. And you know how Stuart [Baxter‚ Chiefs’ new head coach] plays his game also – it suits what they have there.

“And probably it suited Gavin [Hunt‚ Chiefs’ ex-coach] in the Champions League‚ and maybe not in the DStv Premiership.

“And you can maybe say the top three in SA – Pirates‚ Sundowns [and AmaZulu] – are more suited to the Premiership. But maybe not for international competitions.

“Because international competition is about the body‚ strength‚ playing direct‚ having the first touch and scoring when no one thinks there’s a goal. My team scores when there’s no goal.

“At Sundowns I know that I have to make a goal. I have a Themba Zane‚ a Gaston Sirino‚ I can make a goal. At Al Ahly‚ you saw the goals against Sundowns [in the quarterfinals].

“The Sundowns way – my philosophy. It’s coming out – it came out this weekend in Alexandria [in Ahly’s 4-0 league win against Smouha]. But we can also score the goals that we scored against Sundowns – be very careful of that.

“So we have a goal [in us] at Al Ahly. And I can tell you‚ you must never underestimate it – there’s a goal at Chiefs on set pieces. And Nurkovic can always sneak one even if it’s not a set piece. So we’ve got to respect.”

Ahly beat Esperance de Tunis 4-0 in their semifinal‚ displaying a tactical masterclass from coach and team.