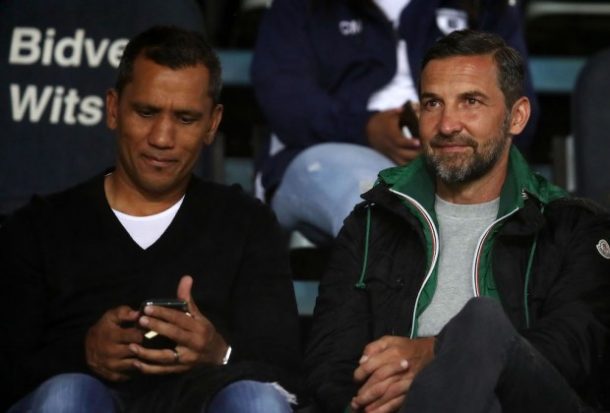 Orlando Pirates have transformed into an at times breathtaking attacking machine since coach Josef Zinnbauer’s arrival three months ago‚ but goalkeeper Wayne Sandilands insist that the German mentor did not wave a magic wand and fix the side’s problems with a flick of the wrist.

Pirates face traditional rivals Kaizer Chiefs at a sold out FNB Stadium on Saturday and are on an eight-match unbeaten run that includes winning the last six league games in a row after battling for consistency under previous coach Rulani Mokwena.

Sandilands said the team did not transform overnight as Zinnbauer has worked very hard to organise the team better in all departments.

“It’s hard to pinpoint one thing to say this is why everything has changed‚” said Sandilands‚ whose own form improved considerably after Zinnbauer took over from Mokwena in December.

“Everybody has bought into the style‚ the structure‚ and ja‚ I think it’s just the mix of things.

“I can’t really say what it is.

“But as things stands now‚ with all the chemistry‚ it’s a good environment to be in.

“I just think the chemistry right now is good as a team and hopefully we can just continue dominating as we have.”

Pirates have already suffered two losses against Chiefs in official matches this season but the Bucs glovesman said they have an opportunity to correct things on Saturday in a game that could have a major influence on the destiny of the league title.

“I think the season in a whole has been a little bit of an inconsistent one for us as a team‚” said Sandilands.

“We obviously didn’t start the way we wanted while we actually had high expectations coming off how we ended last season.

“We wanted to just pick it off from the beginning‚ pick up where we left off and just go.

“It was a bit disappointing for us‚ how we started‚ and obviously with the coaching changes it’s never easy.

“But as things are turning out right now‚ we are sort of gaining form which we’re happy about.

“I mean there’s still nine or ten games remaining‚ so I think for us we’re not trying to summarise or trying to conclude what the season has been for us.

“We’re still trying to make the most out of it and taking one game at a time and ja‚ the talk about us being title contenders… everybody is got to play everybody at the top there.

“So we’ve got a very important four games (against Chiefs‚ Mamelodi Sundowns‚ SuperSport United and Bidvest Wits) ahead of us now.

“So we just have to focus on the next step because if you start thinking too much ahead of yourself‚ you lose focus and too many emotions probably come up and creep up.

“So for us it’s a matter of just focusing on the very next game‚ which is Chiefs‚ and the three points that are available on Saturday.

“We’ll do everything in our power to get those three points.”