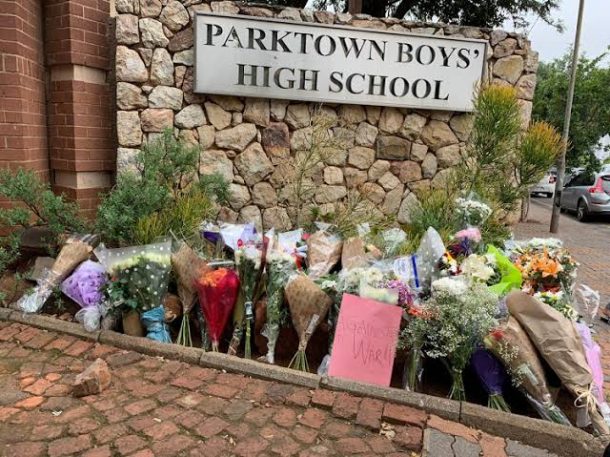 The call by a handful of concerned citizens who gathered outside Parktown Boys’ High School on Tuesday morning was clear: “Suspend all teachers involved‚ including the principal pending the investigation into Enoch Mpianzi’s death.”

The small group held placards that read: “A black child’s life is worth less than the price of a jacket.” A second read: “#Justice for Enoch.”

A few bouquets of flowers lay at of the main gates of the school.

On Tuesday morning‚ all classes resumed with many parents dropping off their children.

One of the organisers of the march‚ Vanita Daniels‚ said she was filled with sadness and rage after reading about Mpianzi’s death on the news.

“I got angry when I saw the non-statement from the school and I got livid when I read the Sunday Times article.

“Then there was this wall of silence where we couldn’t get answers to very simple questions that wasn’t rocket science.

“Simple questions like: Did he wear a life jacket? Did the kids wear life jackets? Why can’t you [Parktown Boys] answer that?

“Did you do a roll call after the incident?”

Daniels said she stood in solidarity with Mpianzi’s parents to demand justice for his death.

“It is inconceivable that you send your child to a school and they don’t come back‚” Daniels said.

She called on the department of education to suspend all teachers and the principal pending the probe into the incident‚ adding that the camp should also be closed.

“How can it be business as usual for them? Broadly we need to look at this culture of orientation camps‚” she said.

Mpianzi is believed to have died during a river rafting accident while on a school orientation camp for grade 8 pupils. The camp took place at Nyati Bush and Riverbreak Lodge in the North West last week. A postmortem report is awaited and an independent inquiry has been instituted.

Natalie Ridgard‚ who also gathered at the school‚ said it was important to demand accountability from the school system.

“We need transparency‚ accountability and the truth.”

Ridgard‚ who is the mother of a 10-year-old a 6-year-old‚ said it was important to teach children to say “no” when it comes to taking part in activities on orientation camps.

“If this is what is going to happen at schools‚ we need to teach our children to say no if they feel uncomfortable about doing something.”