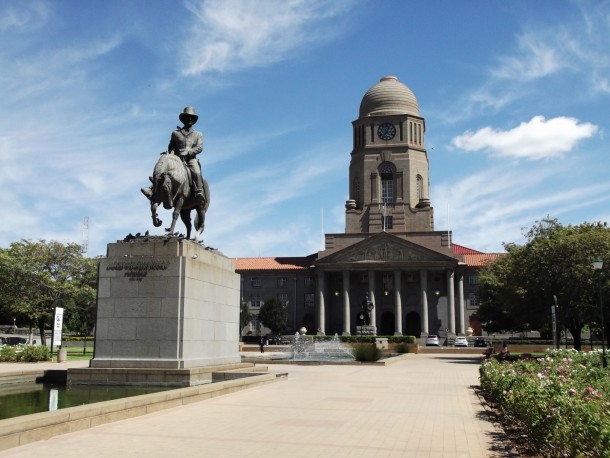 Paradise outside the Tshwane City Hall‚ but a different story inside

It is a paradise outside the Tshwane City Hall in the city centre. At the entrance stands the statue of Martinus Wessel Pretorius which faces the National Museum of National History across the road.

This statue is about 60 metres from the door of the hall.

Pretorius is separated by a small pond from Andries Wilhemus Jacobs who is on a horseback‚ also facing the national museum. Another pond separates Jacobs from Chief Tshwane of the Tshwane Royal House.

These three statues tower over lovers reclining under trees enjoying Pretoria’s beautiful spring sunshine. Famous Jacaranda trees seal the city hall precinct making it a perfect spot for residents to relax. This place feels like paradise until one enters the hall of the country’s capital city.

The former Kgosientso Ramokgopa administration ran down this 80-year old building‚ spending about R100-million which cannot be accounted for.

A forensic report compiled by Ramokgopa’s administration identifying serious flouting of procurement processes has been gathering dust in his old office.

Now‚ the new mayor‚ Solly Msimanga‚ has opened a case with the South African Police Service‚ which it has handed to the commercial crimes division so that those responsible for the mess can be brought to book.

Among the flouting of the regulations was the use of money from an operational budget‚ a mayor’s lekgotla and other city funds to spend on tearing down this hall. The roof was leaking and it damaged the organ which is one of the biggest of its kind in the southern hemisphere. The City of Tshwane now has to disassemble it and ship it to Chicago in the US to be fixed at a cost of about R18-million.

The floor‚ described by Tshwane officials as once being the best dance floor‚ was immediately messed up by placing a new wooden floor‚ eliminating the bounce that dancers had enjoyed for decades.