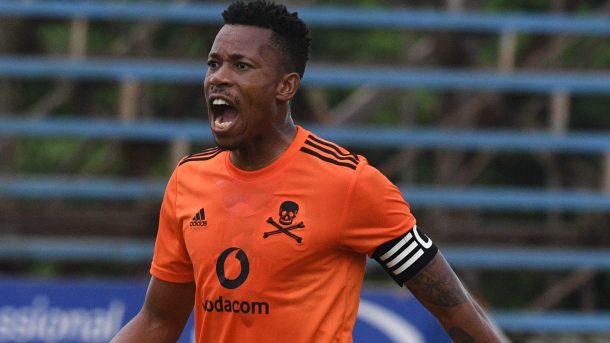 Orlando Pirates captain Happy Jele is confident that the club’s current generation of players can better the class of 2015 and win the Caf Confederation Cup.

Jele is the only remaining member of the Buccaneers team that lost 1-2 on aggregate to Étoile du Sahel of Tunisia in the 2015 final and he believes his current team-mates can go all the way to the title.

Pirates host Nigerian giants Enyimba FC at Orlando Stadium on Wednesday and they will be in search of their first win of the group stages after two matches. A win Soweto would move the Bucs to the top of their group.

“I see a lot of potential in this team because of the way we play‚ and the effort that we put in our work‚” said Jele.

“We work for one another on the field and it is possible that we can reach the final again and even get the cup as well. We have a good squad‚ all we have to do is to go out there and get desired results as we go along.”

Jele said they have a pretty good idea of what to expect when they face the two-time Confederation Cup champions.

“We had a chance to watch some of the Enyimba videos on Sunday and Monday. We know that they are a dangerous team‚ but we have also noted some of their weaknesses that we will be looking to exploit.

“This competition is very important for us because Pirates is a very big brand and we need to consistently compete at the highest level on the continent. The little that I have as a senior player in the team is to make sure that I share my knowledge with the rest of the guys.

“Last week we earned a valuable draw away to ES Setif of Algeria and obviously the guys are highly motivated. It is very important for us to win at home and that is our main.”

“As a coach or player‚ there is always pressure at a big club like Pirates. But we need this pressure because most of the times it gives us the motivation to go for three points.

“These are two teams that are very big in their countries with lots of pressure‚ but I know that players are completely focused and this is what you want as a player and as a coach.

“It is normal for players to measure themselves against other big teams and other big players. I think the first thinking is to try and win against Enyimba‚ and pressure is our daily business. In football there is always pressure and we need it to motivate us for good results‚” said Zinnbauer.