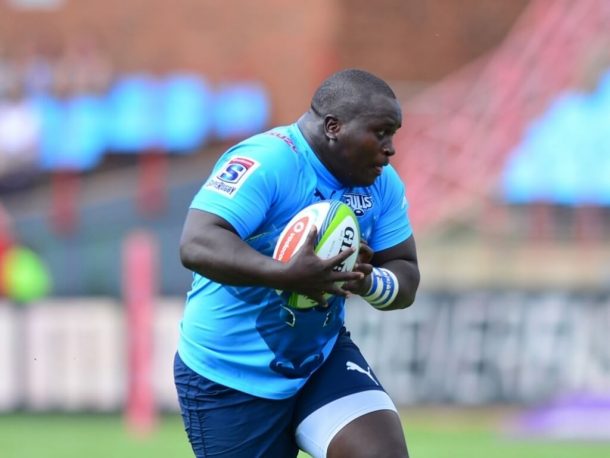 Bulls stand-in captain Trevor Nyakane has called on his team-mates to raise their hands and take responsibility when they host the Jaguares in their Super Rugby clash at Loftus on Saturday afternoon.

World Cup winner Nyakane‚ who will be the second black African player to lead the Bulls from the start of the match after Chiliboy Ralepelle‚ said their aim is to register their first win of the season after three successive defeats.

“It’s an honour and pleasure for me to be appointed as captain for the Bulls‚ but we all know where we are at the moment and what is needed to be done‚” he said during the squad announcement at Loftus on Wednesday.

“It is time for the boys to stand up‚ make a step up and take full responsibility. We are playing against a team with a very strong pack and that likes to scrum and maul.

“If you look at them closely‚ most of their tries comes from set-pieces. That is an area where we will have to focus more on this weekend because we know that if we can stop their momentum we will be able to put them under pressure.

“If we manage to put them under pressure‚ we will have a better chance of winning the game. We have Lizo (Goboka) and Jaco (Vidagie) in the pack who are very good players and they have brought something different to the team in terms of scrum dominance.

“If you dominate teams‚ they start worrying and asking themselves questions of how to beat you. The other positive thing for us is that we have scrum coach Daan Human who fully understands the dynamics of the scrum.

“He has done a lot for me and the rest of the team. He took players from where they we were just okay players and just surviving to dominating scrums. We still need to dominate more in the scrums because you can’t defend penalties.”

Nyakane‚ who will lead the side in the absence of injured regular captain Burger Odendaal‚ added that he will tap into the experience of senior players like Morné Steyn‚ Lizo Goboka and Marco van Staden at decision time.

“Thankfully there are a few players with experience in the team who will be working hand in hand with me to steer the club in the right direction‚” he said.

“It’s not going to be easy but we all have to stick together as a group.”

As they go in search of their first win of the season after three successive losses to the Sharks‚ Stormers and the Blues‚ coach Pote Human said he was impressed by the attitude of the players at training.

“Guys have taken responsibility and they showed that at training this week where they worked on their skills set.

“I believe we will better on Saturday.

“I hope there won’t be any rain and we play a good brand of rugby.”

In other noteworthy team news‚ Tongan centre Nafi Tuitavake will make his first appearance for the Bulls in the competition while fullback Warrick Gelant will earn his 50th Super Rugby cap against the Argentineans.