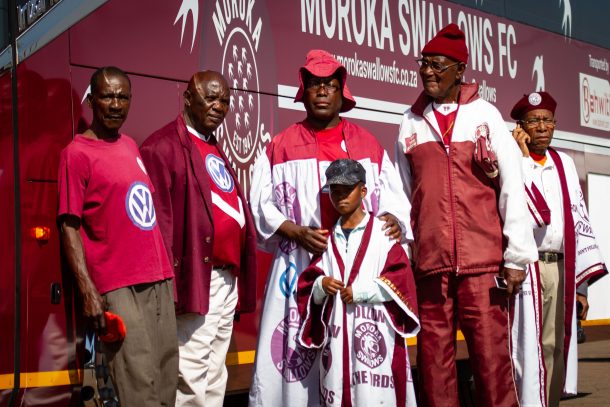 The great football name of Moroka Swallows will not return to the Premier Soccer League next season if the Birds succeed in an increasingly credible promotion challenge this campaign‚ with the team stuck with the title Swallows FC for now.

The businessman behind bank-rolling Swallows FC’s charge up to second place in the GladAfrica Championship (First Division)‚ David Mogashoa‚ said he does not expect the Moroka Swallows name change issue to be resolved by the start of next season.

Swallows – with eight wins and a draw from nine matches before this weekend’s 3-2 defeat away to Pretoria University – are well on course for the playoffs and just five points behind long-time leaders Ajax Cape Town for a chance at outright promotion.

If they do manage a return to the PSL – revived from a plunge to the depths of the amateur Motsepe League (third tier) by businessmen‚ including Gauteng education MEC Panyaza Lesufi – it will be as Swallows FC.

The naming issue derives from a case for outstanding payment against the Moroka Swallows of former owner Leon Prins who were relegated from the PSL in 2014-15‚ to Brazilian midfielder Igor Alves‚ who turned out for the Birds from 2008 to 2011.

Swallows FC are wary of a name change that could then backfire due to a Fifa sanction. There is a possibility of points being deducted from Moroka Swallows.

Mogashoa explained to TimesLIVE that even if Swallows wanted to pay Alves directly‚ they cannot.

“The Moroka Swallows issue has to do with Igor Alves‚” the Swallows FC chairman said.

“He was signed by Moroka Swallows then‚ and then he was released and there were some payments outstanding‚ and the matter was taken to Fifa.

“We need to resolve that matter. Unfortunately it’s going to take time because we can’t deal directly with Fifa or Igor Alves.

“We have to make sure that we resolve everything correctly. We don’t want to change the name‚ then something is not resolved‚ and then we can’t use the name.”

Swallows’ dramatic rise to second in the NFD comes after the team had an understandably poor start negotiating the tricky process of buying a franchise – Maccabi FC – in early August last year.

After one win in five matches Zeca Marques was replaced by ex-Cape Town All Stars and Richards Bay coach Brandon Truter‚ who has overseen the club’s turnaround.

Swallows have 40 points from 23 games in the NFD‚ Ajax 45‚ and third-placed Uthongathi FC 39. The Birds meet Uthongathi in a big match-up at Dobsonville Stadium on Saturday (kickoff 3.30pm).