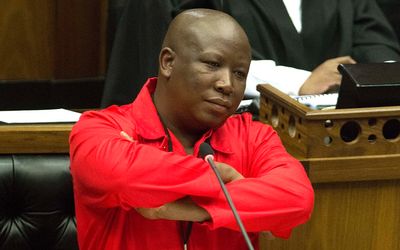 No more red overalls in Parliament for EFF

EFF MPs will soon be barred from wearing their trademark overalls, hard hats and gumboots in parliament as the institution enforces its dress code.

Overalls, helmets and gumboots are among informal wear and headgear deemed inappropriate by parliament’s review of rules subcommittee, according to the final draft of the proposed guidelines.

ANC MP and rules review subcommittee chair Richard Mdakane told Sowetan the new guidelines were not designed with any political party in mind. “Parties and individuals come and go,” he said.

Mdakane said parliament’s rules state that MPs should dress in a manner befitting the decorum of both houses.

According to Mdakane, the review began before the EFF’s two dozen MPs arrived in parliament in 2014, but the process was delayed to allow the then new party to participate in the review.

Mdakane said the new guidelines will be adopted before parliament’s current term ends next month after being considered and adopted.

To threats of a court challenge by the EFF, Mdakane said he would be happy if this went ahead because courts would clarify the issue.

But he warned the EFF: “They must respect the views of the majority.”

Mdakane said there was nothing wrong with using the majority to realise goals.

He said there should be an element of civility despite disagreements.

EFF members caused a stir when they first arrived in parliament in 2014, wearing red overalls, hard hats and gumboots. Recently though, some EFF MPs have upped the ante, with one photographed wearing a red designer overall.

Meanwhile, EFF leader Julius Malema will square off with parliament in court again next month.

The Supreme Court of Appeal (SCA) will hear National Council of Provinces chairwoman Thandi Modise’s appeal of an April 2015 Western Cape High Court judgment setting aside her decision to order Malema to leave a joint sitting.

Modise ordered Malema to leave the house after he refused to withdraw his statement that the “ANC government massacred the mineworkers at Marikana” and added that the police who killed them “represented the ANC government”.

The SCA will rule whether the high court was correct to set aside Modise’s ruling and if Malema’s conduct justified expulsion.

EFF spokesman Mbuyiseni Ndlozi, also a member of the subcommittee, could not be reached for comment.